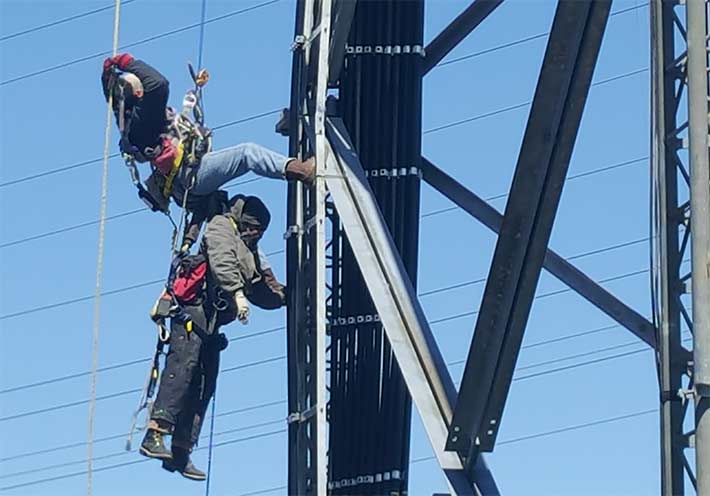 On May 6, 2019, a tower technician employed by Infinity Construction Solutions, Inc. called 911 to rescue his unnamed coworker off a monopole in Georgia. A Gwinnett County Fire and Emergency Services spokesperson informed Wireless Estimator that it took two hours to perform the “methodical” rescue. He was then transported to a hospital. They did not provide the extent of his injuries. Due to the lengthy rescue time, if it was a serious heart attack, it’s likely he would have died.

Three weeks earlier on April 19, 2019, a tower tech was rescued by San Antonio, Tex. firefighters after he broke his arm while working at about the 130-foot level on a monopole. It took the city’s rescue personnel about three hours to bring the worker to the ground. Due to the lengthy rescue time, if it was a serious heart attack, it’s likely he would have died.

Three years earlier on April 5, 2016, an NB+C employee contacted 911, informing them that a fellow tower climber needed to be rescued from an approximate height of 120 feet on a Crown Castle 229-foot self-supporting tower in California, Md. However, foreman Gary Salisbury wasn’t going to rely upon firefighters responding, creating a rigging plan and possibly taking two or more hours to rescue John Gosnell, 44, knowing that if it was a serious heart attack, it’s likely his co-worker would die.

And what neither Salisbury nor Gosnell knew was that the 44-year-old climber was having a widow maker heart attack due to 100 percent blockage of his left anterior descending artery.

As rescue workers arrived, Salisbury was already climbing the tower to rig it and bring down Gosnell. The entire rescue took approximately 15 minutes and the married father of eight children was airlifted to the hospital where a stent was inserted.

As he was being monitored in ICU he had another widow maker heart attack. Then Gosnell flatlined. He was resuscitated and another stent was inserted and he recovered, Gosnell informed Wireless Estimator in an interview this week.

Salisbury never viewed the rescue as heroic, although any time a firefighter rescues a climber the local media attributes their actions as being dangerous and heroic.

Salisbury did what he was trained to do – climber rescue.

Unfortunately, it’s apparent that some tower crews have climbers that may be rescue trained, but aren’t comfortable with performing one. 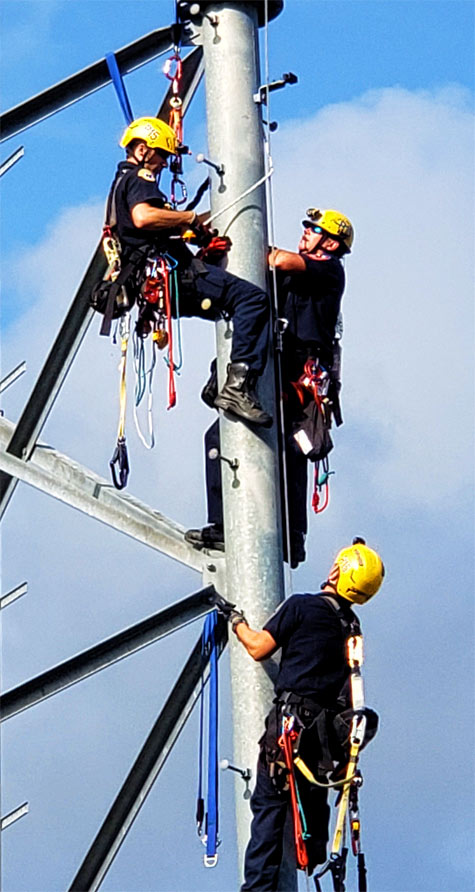 Following Wireless Estimator’s publication of the Georgia rescue, dozens of Facebook viewers questioned the crew’s inability to rescue their co-worker.

One post cautioned that Gwinnett County said that the emergency services crew had to ‘stabilize’ the worker before lowering him to the ground, possibly indicating that there were extensive injuries, such as a broken back or neck or another injury that required a backboard and could result in further life-threatening injuries if he was improperly lowered.

However, according to a source knowledgeable of the incident, the climber was lowered in his harness – perhaps the best safety equipment to use even if there is vertebrae damage.

Over the years there have been exploratory conversations between climbing safety experts, firefighters and other stakeholders investigating lowering workers with back, neck and other injuries and the general consensus has been that the climber’s harness might provide the safest transport.

It is not known what percentage of rescues are not performed by crew members.

In the past 15 years of covering industry safety, Wireless Estimator has published articles where outside emergency services were required.

In a July 2016 rescue in Kentucky, Bernard Holly rescued a tower tech from the 300-foot level of a self-supporting tower after his co-worker succumbed to heat exhaustion.

Three months later, a tower tech had to be rescued by firefighters off a 100-foot self-supporting tower in Louisiana for heat exhaustion.

With the media’s fascination with rescues, most of them are quickly reported. However, it is possible that there are some rescues by tower crews that do not make the news since they are in rural areas with no media coverage or they were performed without asking for emergency services assistance.

It’s been reported to Wireless Estimator that on occasion they will roll up to a site and want to take over. In addition, sometimes they will overcomplicate the rescue.

Also, some of the harnesses without D rings and equipment are not conducive to tower rescues.

In addition, firefighters might lose focus if they are climbing in a strange environment where they’re exposed to RF dangers and don’t understand proper anchorage points and other important tower-specific safety considerations already ingrained in tower climbers.

A safety director informed Wireless Estimator that when firefighters were at a broadcast tower to rescue a worker, they were professional when they had to perform a night climb, but one of the firefighters later informed him, “We were scared shitless, we were way out of our element,”

Firefighters embracing the need for training
Industry safety observers noticed that during the Gwinnett County rescue, a firefighter was wearing full turnout gear as he climbed the monopole, possibly indicating that he was not fully trained in tower rescue.

Following the successful rescue, the responding firefighters migh have realized that they were not fully prepared for rescuing a crew member off of a monopole or any other communications tower and contacted the structure’s owner, SBA Communications, enquiring about training.

SBA Vice President, Risk Management David Sams gave them an offer they couldn’t refuse; SBA is going to provide them with, at no charge, a three-day tower rescue training course, providing them with all of the safety equipment that is necessary when a fully-equipped tower crew rolls up on a job site.

At the end of the training, all of the equipment will be donated to Gwinnett County Fire and Emergency Services, said Sams.

Throughout the years, SBA has provided the same services to firefighters whenever they can as part of the company’s community outreach program.

Sams said that it’s always best to contact 911 when there is an incident requiring rescue but to then use the crew’s competency to quickly and safely rescue their co-worker.

“Let them know that you’re in control, but you would like a backup. When they show up and you’re demonstrating that you’re competent, they’ll assist you and that’s what you want,” said Sams.

Then why aren’t crews rescuing their co-workers?
Sams believes that the two main reasons that crew members are calling for firefighters to rescue an employee are because they have inadequate tower rescue training or they don’t have the proper rescue equipment on site.

John Paul Jones, President of leading safety training company SafetyLMS, agrees with Sams. “They may have had training in the past, but Z359 requires that they are recertified annually and that always doesn’t happen,” said Jones.

In addition, it’s common knowledge within the industry that some certifications are fraudulent copies.

One training company executive informed Wireless Estimator that “some people who come to be recertified haven’t a clue and it’s obvious they’ve had very little training if any.”

Jones has also trained some firefighters in rescue training at no charge, but as with any training company, their volunteer time is limited.

It is not known whether fire departments are taking advantage of grant money available for tower rescue training and equipment.

So how is Mr. Gosnell faring today?
Although Gosnell lost approximately 15% of his heart’s capacity following the two major heart attacks, climbing was still in his blood and he wanted to get back to work as quickly as he could.

But rehabilitation was going to take some time and bills started to pile up when he couldn’t work for three months.

“I had no idea that someone had put in an application to the Tower Family Foundation for me to see if they could assist my family,” said Gosnell.

“I opened a letter from them and just kept staring at the check. I couldn’t believe it. I had to call to see if it was real. If it hadn’t been for friends and family and the great help from the Foundation I would have lost everything,” he said.

Although he had previously climbed to 1,600 feet, he found that he was only able to reach much lower heights before tiring and had been doing some groundwork.

However, after entering the business in 2001, Gosnell’s entrepreneurial spirit kicked into overdrive recently and he and a partner formed Maryland-based Vines Integrations with one crew that does considerable groundwork as well.

His mantra: “If you climb, you need to be rescue certified.” He’s living proof why that’s so true.