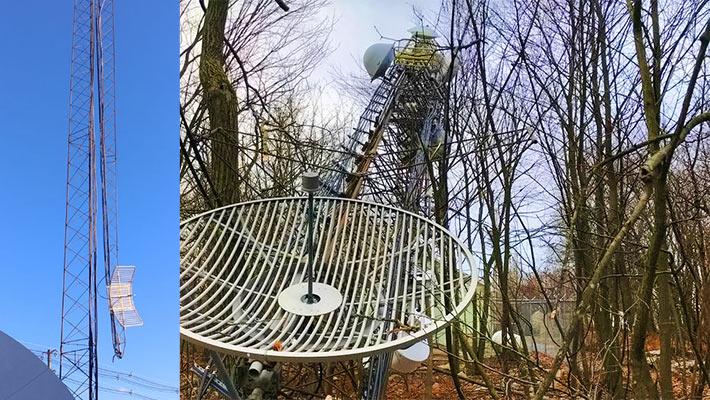 On Wednesday, two towers collapsed from heavy winds, the 100-foot WAKY tower, at left, and the 181-foot SBA structure

In 2017, SBA Towers II, LLC petitioned the Ferguson Township, Pennsylvania Board of Supervisors to replace an existing 181-foot self-supporting tower located at 200 Jackson Trail in the Rothrock State Forest.

SBA entered into a ground lease in 1995 with the Commonwealth of Pennsylvania, but the tower became structurally unsound over the years and in 2017, SBA said that the tower was in disrepair and was “structurally failing”.

Setback requirements and the structure type evaluations kept the replacement tower from being built until July 2019, when SBA received a favorable ruling.

Since that time the tower has been identified by SBA as being unsafe for climbing. On Wednesday night amid heavy winds it took its final bow, knocking out WJAC-TV for its State College signal — and internet service providers.

According to Shane Imler, whose communications company contracts with GetWireless to install and maintain equipment on towers, said that before it collapsed he was long unable to climb the tower for repairs because of its condition.

Dan Myers, the owner of GetWireless, a tenant on the tower, said he has been asking SBA replace the tower for more than three years and was told in 2017 that a new tower was in stock and ready for replacement. He said he was told by SBA on Friday that a building permit has not been issued for the replacement, according to State College.com.

High winds on Wednesday also toppled Elizabeth , Kentucky’s WAKY 103.5 FM tower. The station is confined to online streaming after its tower snapped in half. Repairs to allow the station to resume normal broadcasting could take a few weeks, according to station management.