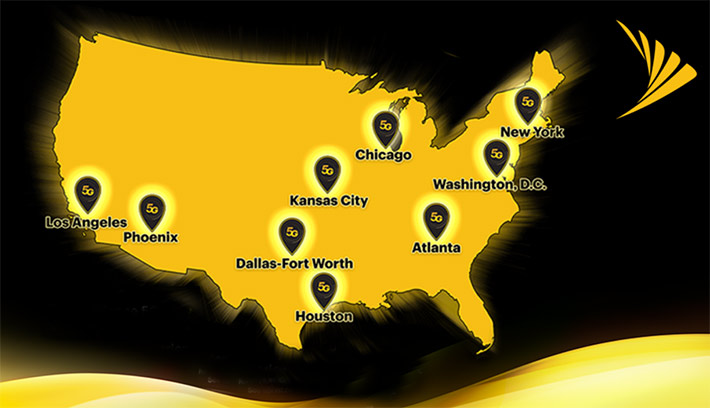 Sprint said that its customers are among the first in the world to experience the power and performance of True Mobile 5G with the largest initial 5G coverage footprint in the U.S. In a press release they said, “The next generation of wireless service is here, delivering blazing-fast speeds in areas of Los Angeles, New York City, Phoenix and Washington, D.C. True Mobile 5G from Sprint is set to power new experiences for wireless customers, from gaming and entertainment services, to IoT and business applications. Starting today, Sprint customers can enjoy Hatch mobile cloud gaming on Sprint’s 5G smartphones.”

The carrier said with yesterday launch, launch, Sprint’s True Mobile 5G service is now available in areas of nine markets. In May, Sprint launched 5G service in areas of Atlanta, Dallas-Fort Worth and Kansas City, following with Chicago in mid-July. Sprint 5G covers approximately 2,100 square miles, with approximately 11 million people expected to be covered in total across all nine market areas in the coming weeks, more than any other U.S. carrier to date.

“We’re proud to give Sprint customers their first truly mobile 5G experience in some of the biggest cities in the U.S.,” said Sprint CEO Michel Combes. “With our initial nine market launches complete, it is just the start of what we can achieve with T-Mobile, together building a better, faster, nationwide mobile 5G network that benefits all U.S. businesses and consumers.”

“We are delighted to partner with Sprint to support the launch of 5G in some of their largest markets,” said Rajeev Suri, Nokia President and CEO. “We have long collaborated on the deployment of our Massive MIMO and 5G innovations, and it’s exciting to see our joint work come to fruition. The cities we’re launching today are among the largest and most dense urban markets in the U.S., requiring significant expertise and stringent testing to ensure quality, performance and delivery.”