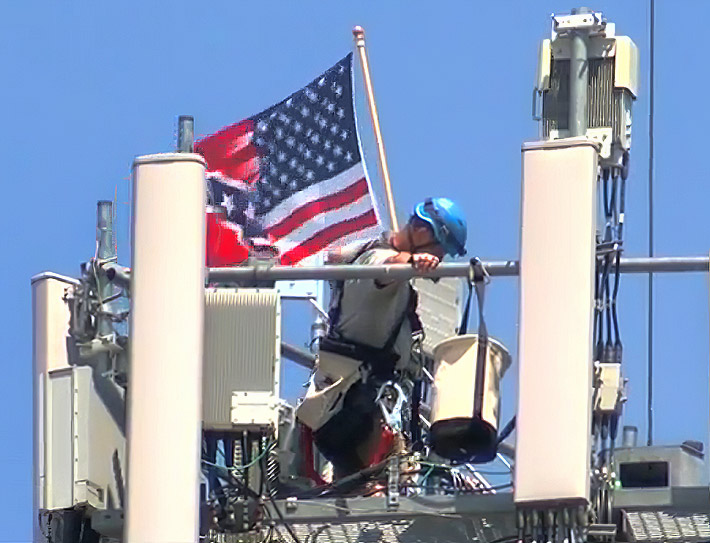 When the tower technician saw a TV reporter filming, he took down the flag. Photo: KMTV video frame capture

Call out someone for having too many groceries in a 10-item checkout line and you could be called a racist. No matter which side of the political aisle you’re on, there’s a chance that you might be called a race-baiter or you are weaponizing race in some manner. And it’s likely that the R word will be a frequent inclusion in comments from Democrats in tonight’s debate.

So, in the race to 5G, will race become an issue? It has, at least last week in an isolated incident when a tower tech on Saturday raised an oddly stitched together American and Confederate flag at the top of a monopole in Omaha, Neb. that he was working on as part of a 5G Sprint project.

Although news reports said that when people drove by Millard West High School they were dismayed, it appears that just a few teenagers and adults were concerned.

But even though the incident only had a flimsy racial undercurrent, it ranked high with KMTV.

One young lady hanging out on school grounds told a KMTV reporter, “I’m angry about it. Who would stand there and say it has nothing to do about slavery when that is what it was founded on? That’s what it represents.”

The tower tech told the reporter that while some people see the flag as a negative thing, for him its not about hatred, it’s about heritage. He said his great grandfather fought in the Civil War and to him the flag is an ode to that.

A coworker said he hangs the flag on whatever cell tower he’s working on.

As soon as KMTV started filming at the cell site the worker removed the flag.

But KMTV still thought it was important to contact the tech’s employer and AJ Fusco, Managing Partner at Iconic Communications quickly issued the following statement: “Iconic Communications will not stand for any acts of racism or bigotry of any type and I can assure the public that we will address the employee’s conduct as soon as all of the facts have been received.”

Flying the Confederate flag has become a divisive issue in America, with almost half of the nation having a split opinion. Cutting an American flag in half and sewing it together with another flag is generally considered by most people to be disrespectful.

For many years, tower erectors have followed their fellow ironworkers in hanging an American flag when a tower is topped out, symbolizing completion, the values of America and their pride in a job well-done.