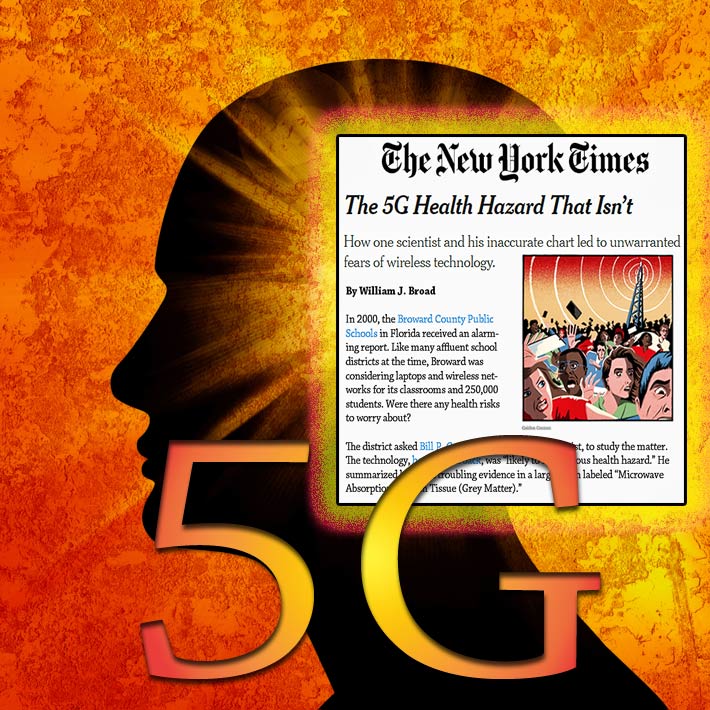 The New York Times is fast becoming the nation’s leading advocate for exposing 5G cancer myths and educating the public that cell towers and especially 5G frequencies are not dangerous as they’re frequently described in the media and social networks.

In an extensive article written by Pulitzer Prize-winning science journalist William J. Broad this week, he exposes how Bill P. Curry  who at first seemed to have all of the right credentials became ground zero for false RF cancer claims starting in 2000 when he consulted for the Broward County Public Schools in Florida.

In a second report that he sent to the superintendent, the school board and the district’s head of safety and risk management, a chart showed the dose of radiation received by the brain as rising from left to right, with the increasing frequency of the wireless signal. The slope was gentle at first, but when the line reached the wireless frequencies associated with computer networking, it shot straight up, indicating a dangerous level of exposure.

“I feel that wireless LAN’s should be kept out of the classroom, and I urge you to make a similar decision,” Curry wrote.

Over the years, Curry’s warning and chart has been used by educators, residents and city officials to foster anxiety over the professed health risks of 5G technology.

Unfortunately for wireless infrastructure developers, as Broad reports, Curry got it wrong because he didn’t have any background or training in biomedical research.

“In his research, Dr. Curry looked at studies on how radio waves affect tissues isolated in the lab, and misinterpreted the results as applying to cells deep inside the human body. His analysis failed to recognize the protective effect of human skin. At higher radio frequencies, the skin acts as a barrier, shielding the internal organs, including the brain, from exposure. Human skin blocks the even higher frequencies of sunlight,” the article noted.

Curry, now 82, disavowed any knowledge of having made a scientific error and said he no longer follows the wireless industry.

“They can say whatever they want,” Curry said of his detractors. “I’ll leave it to the young in the business and let them figure it out.”

Curry is frequently quoted during zoning hearings
According to Lawrence Behr, CEO of LBA Group, “Curry was being quoted over a decade ago when I was a consultant at zoning hearings, and he is still a substrate to the current 5G scares.”

However, Behr believes that much responsibility for undue concern has been promoted by the carriers and their marketing mode which creates 5G as “some new and exotic Flash Gordon technology”.

“They wanted to create a lot of ‘sizzle’ to sell the steak, but the only sizzle to an uninformed public was the ‘this will burn you’ signal.”

“Current research shows most people think their current phones are just fine, and they have no reason to embrace 5G. Also, as stated in your articles where Sprint relocated their tower in Ripon, California, the hype created the perception that mm-wave 5G had already been secretly deployed. The 5G rollout marketing failure may be a great MBA case study for the future,” Behr stated.

Last month, CTIA developed a new website to combat RF fear and fake news. One of their ‘must read’ articles was also a New York Times piece that exposed Russia’s involvement in promoting that 5G could cause cancer.

To date, they haven’t added the newspaper’s most current article.