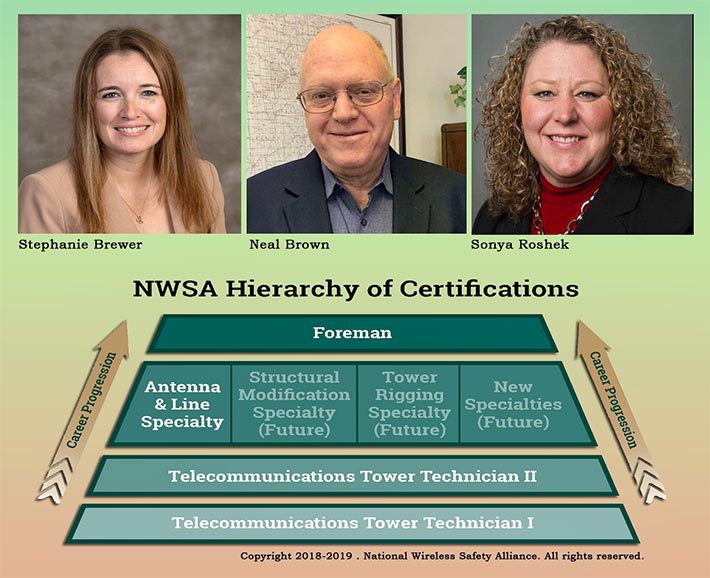 “NWSA is blessed to be able to add Stephanie, Neal and Sonya to the impressive roster of Governors that we have assembled,” stated Executive Director Duane MacEntee. “All three of these individuals possess the subject matter expertise and industry-specific experience necessary that will make them tremendous assets to the organization as we continue to increase the number of workers who achieve NWSA credentials,” added MacEntee.

Stephanie Brewer is the Compliance Coordinator for MUTI-Sabre Industries Telecom Services. Joining MUTI in 2007, Stephanie has worked in many areas of the organization but most recently Risk and Compliance overseeing client contract management and compliance, subcontractor management, licensing, insurance and supporting the company’s commitment to safety through their implementation of the NWSA’s worker certification program as well as the Telecommunications Industry Registered Apprenticeship Program (TIRAP).

Stephanie actively participates in the National Wireless Safety Alliance (NWSA) initiatives by serving previously on the TTT1/TTT2 Task Force, Antenna & Line/Foreman Task Force, and most currently the Written Exam Management Committee. She is a member of the Women of NATE (WON) committee, NATE’s Member Services Subcommittee and the A10.48 Revision Committee.

Neal Brown Jr. serves as the Department Manager of Wireless Development at Pioneer Telephone Cooperative Inc. in Kingfisher, Oklahoma. Neal has been in the wireless industry for twenty-six years.

In his current position, his department is responsible for developing and managing both company-owned and leased tower assets, as well as construction and maintenance contracts and contractors. Neal served as a member of the National Safety Alliance (NWSA) Tower Foreman Tack Force that developed the Foreman and Antenna & Line Specialty certifications.

She previously worked for an OEM and Large GC Turnkey Vendor providing deployment leadership for projects. Sonya has lead large-scale projects including completing a multi-discipline green-field wireless build with microwave overlay for a new carrier spanning two Canadian providences. Ms. Roshek has also served as project lead for both the wire-line and wireless network installations for the 2002 Olympic Games and managed the integration of more than 10,000 cells in the Remote Integration Testing Center (RITC). Sonya is working with the National Wireless Safety Alliance (NWSA) taskforce to advance and standardize the tower industry.