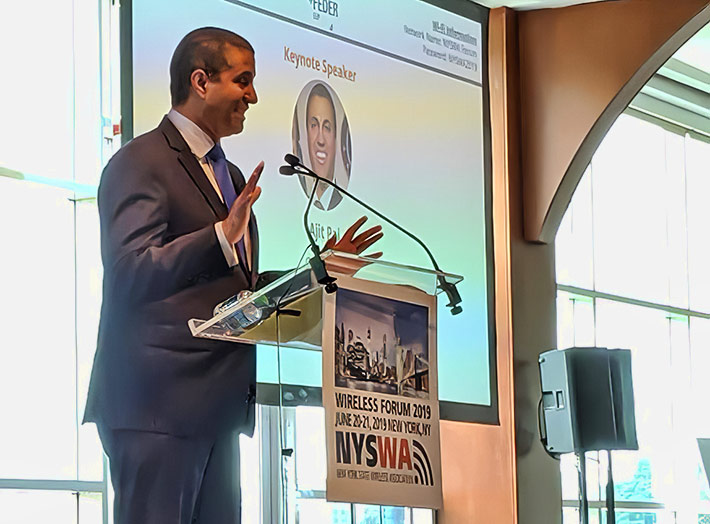 FCC Chairman Ajit Pai gave a double-tip of the hardhat to America’s wireless infrastructure companies and their workers during his keynote speech before the New York State Wireless Association on Friday, citing them as the ‘unsung heroes of the digital revolution.’

“Without your work, there would be no app store; no Uber; no 24- hour health monitoring. You not only risk significant amounts of capital to make ubiquitous, high-speed connectivity a reality, your line workers literally risk their lives to build out these networks. Last year, I climbed a 131-foot tower in rural Colorado, and I thought that was heady stuff. Some of your crews go up towers that are significantly taller like it’s just an ordinary day at the office, because, for them, it is,” said Pai recognizing tower techs.

Pai discussed the misguided efforts by  some Washington government officials that are  making a last-ditch effort to stop 5G deployment in the 24 GHz band.

Pai also touched upon the FCC’s efforts to streamline siting approvals, such as the one-touch make ready policy that will make it quicker and cheaper to build out networks.

Ironically, while Pai was citing the one-touch policy, Crown Castle Fiber was uploading new exhibits to the FCC in its complaint against Commonwealth Edison, an Illinois utility that Crown claims is ignoring the pole siting policy.