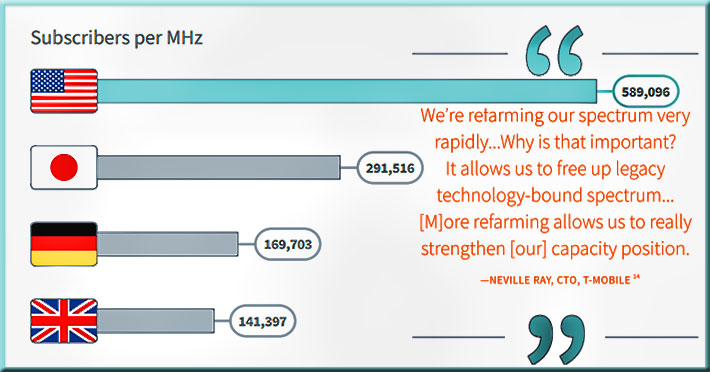 U.S. wireless providers increased their spectrum efficiency 42 times since 2010, according to a new white paper released by CTIA, the wireless industry association. U.S. wireless networks handled 948M megabytes (MB) for every one megahertz (MHz) of spectrum in 2010 and now handle 39.9B MBs/MHz thanks to significant industry investment in networks and technology.

“This paper conclusively demonstrates that America’s wireless providers are excellent stewards of their spectrum assets, a limited natural resource,” said Tom Sawanobori, CTIA SVP and Chief Technology Officer. “The wireless industry’s investment to enhance spectral efficiency and a plan to free up additional licensed commercial spectrum are necessary to deliver the mobile experience that Americans expect.”

These efforts have helped U.S. providers serve over 589,000 subscribers for each megahertz of spectrum—more than twice that of Japan, three and a half times that of Germany, and four times that of the U.K. Further spectrum efficiency gains will flow from the transition to 5G networks, the most spectrally efficient generation of wireless to date.

Wireless providers’ spectrum efficiency efforts are key, but we also need more licensed spectrum. As the Administration prepares its National Spectrum Strategy, we recommend including a clear directive to lead the world in 5G spectrum and make available more low-, mid-, and high-band spectrum to deliver on our 5G ambitions.