FCC Chairman Ajit Pai applauded tower crews for their hard work that enabled broadcasters to meet yesterday’s 39-month repack deadline, although the successful repack came at the expense of workers’ lives. “l think it is fair to say that no group has done more on the ground and in the air to make the benefits of the broadcast incentive auction a reality. So a hat tip to the tower workers of America,” Pai said.

During remarks he made during a webinar panel presentation to the American Consumer Institute, Pai lauded individuals responsible for the world’s first incentive spectrum auction and transition starting with former FCC Chairman Julius Genachowski whose staff fostered the “ambitious” idea to repurpose 84 megahertz of low-band spectrum in the 600 MHz band for licensed and unlicensed wireless use.

Pai said the enormous project “…wouldn’t just happen with the flip of a switch or the stroke of a pen.  No, it would happen because hundreds of men and women would climb hundreds of towers hundreds of feet into the sky to install new equipment. And these tower crews would be asked to do this work in the face of labor shortages, unpredictable weather, and tight deadlines. And some considered those deadlines impossible, even before the onset of a global pandemic.” 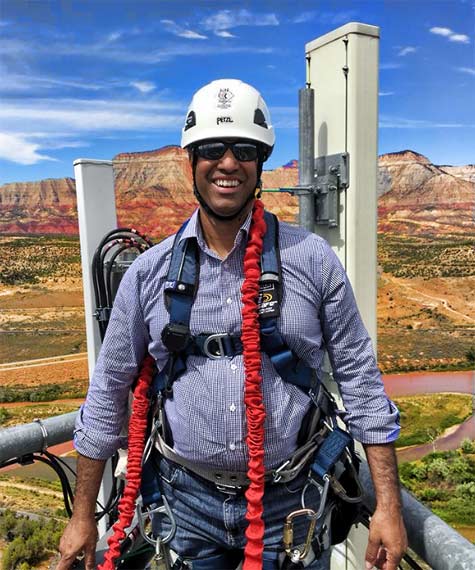 “Let me also say thank you to the tower crews for all you’ve done over the past 39 months,” Pai said, noting that he has a keen appreciation for the difficulty of their work that was the “hard part” of the transition.

“As you may know, I climbed a 131-foot tower in rural Colorado, and that height is a rounding error for some of the tall broadcast towers that you climbed. And on top of all that, tower workers are also deploying infrastructure so that wireless carriers can put the licenses awarded to incentive auction winners to use.  I think it’s fair to say that no group has done more on the ground and in the air to make the benefits of the broadcast incentive auction a reality.”

Pai noted that over 99% of the 987 repacked TV stations have transitioned off their pre-auction channels.

“Now, if you’re looking at this figure as my mom used to scrutinize my grade school report card, you might ask—why 99% and not 100%? Well, the remaining stations that were granted short extensions due to unforeseeable circumstances are on track to transition before the end of the summer.  But none of those stations will delay the deployment of wireless services in the new 600 MHz wireless band. That’s because they are currently located either in the portion of the band that remains allocated for broadcast television or in the duplex gap,” Pai explained.

Naysayers are proven wrong, but there were fatalities

“Many people said it couldn’t be done,” Pai said.

Five years ago, the National Association of Broadcasters lobbied the FCC to reconsider the 39-month window after commissioning a study from Digital Tech Consulting that concluded that only a maximum of 445 stations could be relocated to new channels within the FCC’s timeframe.

Over double that amount was transitioned, Pai said.

There were also concerns regarding a lack of crews and antenna manufacturers and that the too ambitious deadline could result in injuries and fatalities.

There was a horrific accident in 2017 in Florida where three tall tower techs died when a 160-foot gin pole they were on broke loose from a 958-foot tower and the company was cited by OSHA for not securing a rigging plan from a qualified engineer. However, the citation was contested and the erector presented evidence that they did, but an outside engineer understated the load forces for a gin pole lift and the bridal attachment failed.

Tower King ll’s attorney, Tod T. Morrow, in a Wireless Estimator interview, said “It appeared to me that OSHA issued a citation simply because an accident had occurred and then struggled to define what exactly the company had done wrong.”

A company owner was killed in 2018  and two employees were injured when the 1,892-foot TV tower he was retrofitting to meet the broadcaster’s repack requirements collapsed. OSHA closed their investigation after it became known that the company was dissolved following the accident and there were no owners to represent the company if there was a citation.

It is not known if there were repack-related accidents that caused serious injuries.

CTIA held a strong position that the repack schedule should not be stretched out and that the 39-month deadline was “fair and reasonable.”

Panelists during the webinar included Jean Kiddoo and Hillary DeNigro of the FCC’s Incentive Auction Task Force, Rick Kaplan of the National Association of Broadcasters, Steve Sharkey of T-Mobile, and Peter Starke of American Tower.