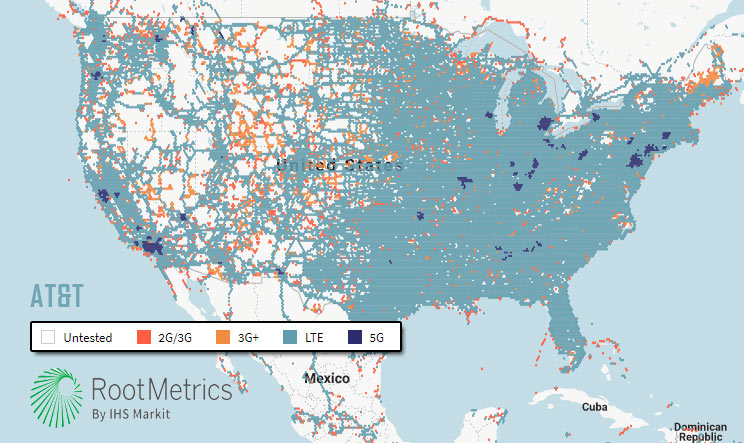 With RootMetric testing efforts currently on hold due to the COVID-19 pandemic, they thought it would be an ideal time to take a look at how the carriers have performed across the 55 markets they’ve tested so far in the first half of 2020.

To kick off their reviews of publishing carrier-specific reports with overviews of performance for both 5G and 4G LTE in 1H 2020, they started with AT&T, and it was an excellent report.

AT&T has deployed its 5G using 850 MHz low-band spectrum in several cities across the US, and the carrier has shown particularly impressive gains since RootMetric’s last round of testing in the second half of 2019. While AT&T’s median download speeds on 4G LTE were already fast in most metros across the country in 2019, the carrier stepped up even more in the first half of 2020.

They found excellent and improved download speeds on the carrier’s 4G LTE network in the 55 markets they completed testing before they paused their scouting efforts, and AT&T’s low-band 5G is also providing generally fast speeds (though not as fast as Verizon’s mmWave 5G).

“This strong showing by AT&T can’t entirely be chalked up to its 5G service, however. AT&T has been investing heavily over the past 18 months to bolster its already robust 4G LTE network. AT&T erected new cell sites in cities across the country, added more spectrum layers, and utilized 5-carrier aggregation (5CA) on a wide scale paired with 4×4 MIMO technology to maximize its vast spectrum holdings and provide faster speeds. AT&T also reallocated some of the spectrum reserved for its FirstNet Public Safety network and began using it for general customers while still satisfying its commitments to first responders,” said RootMetrics in their report.

Root Metrics said that AT&T has taken numerous steps to upgrade its network as 5G deployments continue, and AT&T subscribers are reaping the rewards in the form of faster connectivity that should only get better as the carrier’s 5G continues to expand and mature.

A primary reason for AT&T’s improved speed results in 2020 is the carrier’s widespread usage of five-carrier aggregation (5CA) technology. In short, 5CA allows AT&T to combine five separate channels to increase bandwidth and provide faster speeds. On top of its capacity gains from 5CA, the efficiency of each of those five channels is maximized by AT&T’s utilization of 4×4 MIMO (Multiple Input Multiple Output) technology. MIMO refers to using multiple radio antennas at both the tower and the device, which helps improve capacity, coverage, and speed. In a 4×4 system, there are four antennas on both the tower and device, whereas with 2×2 MIMO, there are two antennas on the tower and device, RootMetrics said.