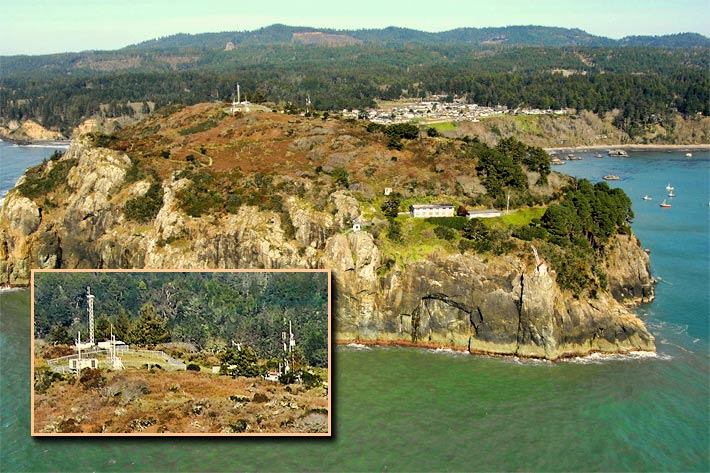 Verizon will be dismantling the structures also used by AT&T and Sprint (inset at right). Under pressure, the City of Trinidad, California did not renew Verizon’s 20-year lease. To the left is a tower used by the National Oceanic & Atmospheric Administration.

For years, residents of the City of Trinidad, California have been objecting to cell towers located atop Trinidad Head, a scenic promontory instilled with deep spiritual and cultural importance by the Tsurais of the Yurok Tribe.

Trinidad leased land to Verizon, which subleased space to AT&T and Sprint. The 20-year lease expired in 2018, but was extended to as Verizon builds two new towers, one of them having AT&T as a tenant. Sprint has already removed its equipment from Trinidad Head.

Trinidad had been receiving $50,000 in annual lease payments.

The Tsurai Ancestral Society yesterday , in a press statement, thanked Friends of Trinidad Head, the Yurok Tribe, and community members who voiced their concerns over the years regarding the cell towers on Tsurewa (Trinidad Head).

Last year, Sheriff Billy Honsal opposed the termination of the Trinidad Head lease in a harshly-worded letter to city officials.

“We don’t need LESS connectivity; we need more connectivity in Humboldt County and this is a vital public safety issue,” he wrote.