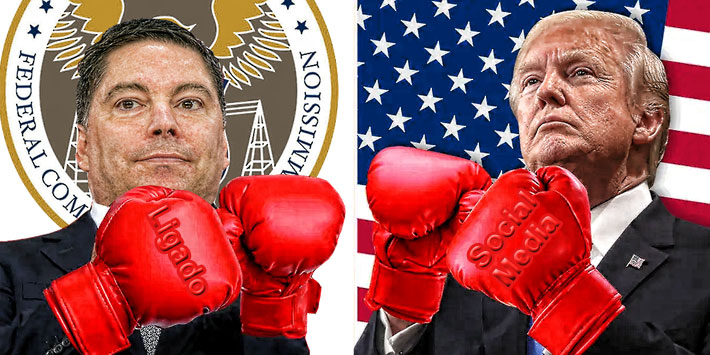 FCC Commissioner Michael O’Rielly fought for Ligado and wasn’t in President Donald Trump’s corner regarding social media reforms that the President would like to see since he believes the platforms are biased against conservatives.

President Donald Trump has rescinded his renomination of FCC Commissioner Michael O’Rielly to serve another five-year term at the FCC.

The reversal issued late Monday came just days after O’Rielly gave a speech in which he indicated his opposition to President Trump’s executive order to try to limit liability protections for social media companies.

The president and many other Republicans have long complained that social media’s content moderation practices are biased against conservatives.

“Like it or not, the First Amendment’s protections apply to corporate entities, especially when they engage in editorial decision making. I shudder to think of a day in which the Fairness Doctrine could be reincarnated for the Internet, especially at the ironic behest of so-called free speech ‘defenders,’” O’Rielly said.

In May, President Trump ordered the Commerce Department to petition the FCC asking the agency to impose new regulations on social media moderation practices.

Yesterday, FCC Chairman Ajit Pai said the agency would take public comments on the petition filed last week at President Trump’s request. O’Rielly has expressed some skepticism about whether the FCC has authority to issue new regulations covering social media companies. However, it’s unlikely that any action will be taken until after the election.

The issue was over the FCC’s order to allow Ligado Networks to create a low-power 5G network on spectrum that has been used for radar and GPS.

Inhofe said July 28 he would block O’Rielly’s nomination until the nominee “publicly commits to vote to overturn the current Ligado order.”

O’Rielly was the most vocal FCC commissioner on the topic of C-band, having pushed satellite operators to give up more of the spectrum for 5G cellular services.

It is unknown whether  O’Rielly will serve out his term, or if he’ll leave now that his renomination is not being considered.

It is also unclear if a new Commissioner would get through any confirmation process prior to the election.

Last March when President Trump nominated O’Rielly, FCC Chairman Ajit Pai said “The President has made a wise choice. When we were in the minority, he consistently stood on principle while being pragmatic.”

National Association of Broadcasters President Gordon Smith said at the time that the NAB “strongly supports” the re-nomination of O’Rielly to the FCC. “Without question, Commissioner O’Rielly has served in this position with class, integrity and distinction.”

Yesterday, upon learning of the withdrawal, Smith said, “Mike O’Rielly has been a sterling public servant for as long as I have had the privilege of knowing him, a span of time covering my years in the Senate and throughout my time leading NAB. He is the consummate professional—smart, diligent, honest, and fair. For these and many other reasons, NAB has been proud to support his continued service at the Commission. But for these reasons also, I have every confidence that he will succeed wherever he casts his lot.”