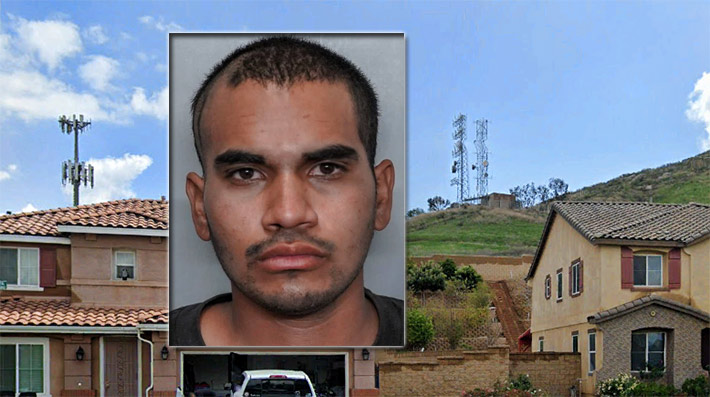 Bryan Uriel Guzman was arrested for setting fire to two cell towers in Fontana, California. The 60-foot monopole, at left, is owned by SBA Communications. SBA had a monopole in Tennessee that was set on fire on Dec. 5, 2019.

The Fontana Police Department said that Bryan Uriel Guzman was arrested on Thursday, June 11 and charged with arson to property, arson of structures and attempted arson.

Bail for Guzman was set at $250,000 pending his initial appearance in San Bernardino County Superior Court, scheduled for today.

Guzman is reportedly the first individual in the U.S. that has been arrested and charged with arson of a communications structure. The nation had been warned that on June 6 there was a possibility of anarchists destroying cell towers on Global 5G Protest Day.

Detectives believe Guzman acted alone, according to a press statement.

A search of social media could not immediately find Guzman active with any anti-5G groups that threatened to destroy towers.

At approximately 3:15 p.m. on Wednesday, officers responded to the Jurupa Hills area near Martin Tudor Park regarding a fire.

Officers discovered a telecommunication tower and dry brush around it were on fire.  San Bernardino County Fire Department extinguished the fire.

Approximately 15 minutes later another fire broke out at an additional tower in the area and the fire was extinguished by on-scene personnel.

When a third tower was examined, an incendiary device was found there that had failed to ignite, police said.

Police and fire investigators were able to identify a suspect, and about 9:40 a.m. Thursday, a police officer spotted Guzman in Tudor Park. Guzman had another incendiary device on him, authorities said.