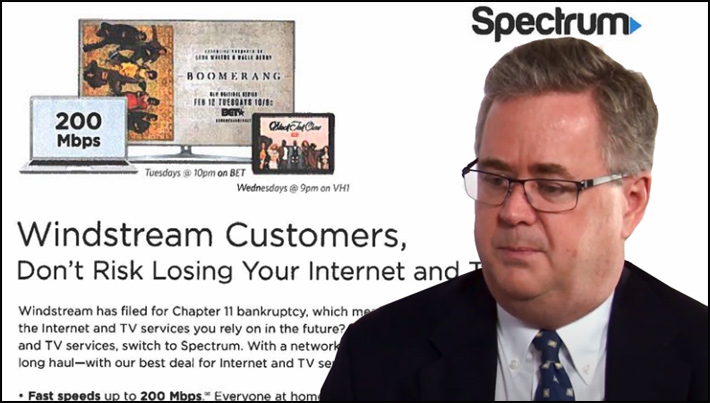 New York Southern District Bankruptcy Judge Robert D. Drain will decide in a bench trial what Charter Communication will pay for a false advertising campaign against Windstream Holdings after the company filed for bankruptcy.

In those counts, Windstream is seeking sanctions against Charter for its breach of the automatic stay in bankruptcy filings that prevents Charter conducting its campaign of sending false and deceptive advertisements to Windstream’s customers, which Windstream says impairs its goodwill which constitutes property of its estate.

Windstream’s lawsuit also states that Charter disconnected service to approximately 350 Windstream customers and when those subscribers contacted Charter to have their services restored, they were told that their service was not going to be reinstated because of Windstream’s failure to pay certain amounts due to Charter.

Windstream does owe Charter $3.6 million, but the company is unable to make any payments due to the bankruptcy filing’s automatic stay provision.

Judge Drain will also be hearing Windstream’s equitable subordination request. Section 510(c) of the Bankruptcy Code grants Judge Drain the authority to relegate Charter’s claims to the ‘bottom of the barrel’ in terms of priority of payment under the subordination doctrine.

On April 16, 2019, Judge Drain entered a temporary restraining order that instructed Charter to “Cease and desist from expressly or impliedly stating in commerce, publishing, or otherwise disseminating in any and all media (including, without limitation, Internet, television, radio, newspaper and other print, billboards, direct mail, telephone and as part of any door-to-door campaign) that Windstream is in bankruptcy or Chapter 11 as part of an effort to persuade Windstream customers to switch their service to Spectrum.”

In a judicial notice filing on April 26, 2020, Charter argued that a prohibition on bankruptcy-related advertising is clearly not defined automatic stay provision of the bankruptcy code.

Last December, Judge Drain issued a partial summary judgment finding Charter liable for violations of trademark violations and state laws for using false advertising to try to convince Windstream customers that its bankruptcy filing meant they could lose their services.

Charter is appealing the ruling, saying the evidence doesn’t support Windstream’s claims. It argues Windstream failed to establish that it and its affiliates were harmed by the marketing promotion.