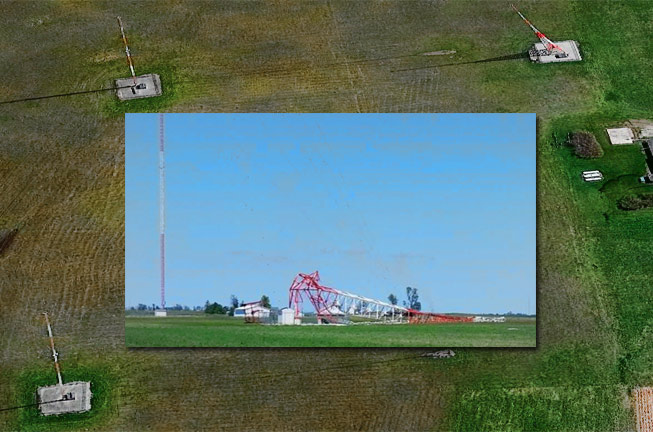 According to the National Weather Service, a powerful line of severe thunderstorms known as “Derecho” tracked across Minnesotta, eastern Iowa, and northwest Illinois in the afternoon of August 10.

Straight line winds were estimated to be around 130 mph, a speed that would be equivalent to a strong EF2 tornado. Maximum measured wind gusts were at 112 mph.

An individual knowledgeable about the collapse said the structure was one of three AM towers in an array. The cleanup and the rebuilding process are already underway and a new tower is expected to be back up in less than 90 days.

So what wind speed was the tower designed for when it was erected? It will be difficult to tell since it was constructed in late 1940 when there was no recognized standard for communications towers.

WMT reported in an FCC filing that its non-directional 5kW daytime tower was not damaged, but that the collapsed tower was part of its nighttime array. The FCC granted it special temporary authority to operate non-directionally with about a quarter of its normal power at night.

Further east in Clinton, radio station KROS lost its 400-foot guyed tower due to the storm. The structure was erected in 1947.

Storm is also unkind to American Tower
American Tower Corp. had the center 300-foot tower of a three-tower array collapse in New Hope, Minnesota. The tower was erected in 1961.

Asian American broadcaster KFXN-AM said the collapse severed their feed lines to the center and west towers and the station is currently operating with only the east tower at a reduced power of 120 watts.