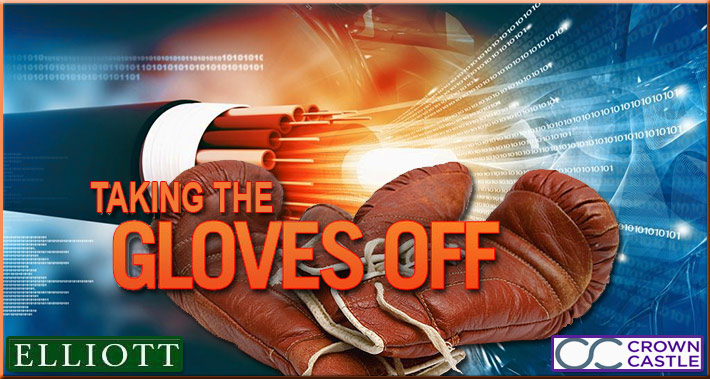 After Activist investor Elliott Management Corporation (Elliott) last month registered its concerns about the operation of Crown Castle’s fiber business, the company appeared to have yielded to its pressure and unveiled a mandatory Board retirement policy of age 72, with several directors, including its founding chairman J. Landis “Lanny” Martin, 73, not being renominated.

However, that didn’t placate Elliott which manages funds that “hold an economic interest” of about $1 billion in Crown Castle, and they took the gloves off Monday.

They dismissed those corporate changes as “incremental steps and rear-guard actions.”

In a letter to the Crown Castle board released as part of Elliott’s “Reclaiming the Crown” campaign, the investment firm said the company should consider “partnering with a capable investor and top-tier fiber operators to manage its fiber assets.”

The full text of the letter follows:

Dear Members of the Board:

We are writing to you again on behalf of Elliott Associates, L.P. and Elliott International, L.P. (together, “Elliott” or “we”) regarding our investment in Crown Castle International Corp. (“Crown Castle” or the “Company”). On July 6th, Elliott published a letter and presentation in which we demonstrated with facts and analysis that the Company’s fiber strategy was detracting from shareholder returns and would continue to do so unless significant changes were made. We subsequently published a follow-up letter calling on the Company to present a multi-year plan and critical performance metrics to allow investors to judge for themselves whether the current fiber and small cell strategy is value-accretive to shareholders.

Since then, Crown Castle has made a number of public statements and announced changes purporting to respond to our findings and analysis:

Taken together, these actions paint a picture of a Company that seems to know there is a problem, but refuses to acknowledge it. The Company’s hope appears to be that this series of incremental steps and rear-guard actions will be enough to avoid the kind of real discipline, transparency and accountability in the fiber business and capital allocation broadly that investors are demanding.

The problem is that real change must begin by acknowledging that there is a need for it. Today — six weeks since the publication of our first letter and three months since we first began to engage with the Company privately — Crown Castle still has not put forward a credible plan to improve performance in its fiber business. After spending $11 billion on fiber acquisitions, losing all key executive talent from those businesses, repeatedly missing publicly stated fiber targets and now parting ways with the COO of the fiber segment, when will Crown Castle admit there is a problem and begin to engage constructively with shareholders on a path forward that will lead to success?

As we have stated numerous times to you, we are bullish on the fiber industry. We have seen how well-run fiber businesses can compound long-term value if operated with prudence and capital discipline — attributes that are sorely needed at Crown Castle. Our “Reclaiming The Crown” plan attempted to reshape the Company’s existing strategy into one that can actually create long-term equity value in fiber and provide the necessary Board oversight to ensure performance. However, it is becoming clear that this management team does not understand what they bought (and spent $16 billion building) and does not understand how to run the business better. Comparisons to the tower industry — such as the one made by the CFO last week in yet another attempt to justify subpar returns in the fiber business — underscore this conclusion.

The most common question we have received from investors has been the following: “Why did Elliott not advocate for a sale or spin of the fiber business?” Our answer is that, unless Crown Castle can demonstrate that it is the best owner of these assets and can run the segment with greater prudence in capital spending and with ROIs that are value accretive, Crown Castle should also consider alternative paths. In fact, we have received numerous inbounds from highly accomplished fiber executives and credible financial buyers who are confident that they can run the fiber business better than Crown Castle. We believe the Company and its advisors have received this interest as well.

As we have consistently stated, our preference is for constructive engagement on a clear and credible path forward for the fiber business that can gain widespread shareholder support. We stand ready to continue that engagement. However, in the absence of any such plan — or even an acknowledgement from Crown Castle that one is needed — we believe that Crown Castle needs to consider the idea that partnering with a capable investor and top-tier fiber operators to manage its fiber assets might be the value-maximizing course of action.

As a large shareholder focused on long-term value at the Company, we believe it is imperative that Crown Castle begin an immediate operational and strategic review of the business and subsequently outline the best path to maximize value and position Crown Castle to finally fulfill its significant potential. We look forward to continued engagement with the Company.