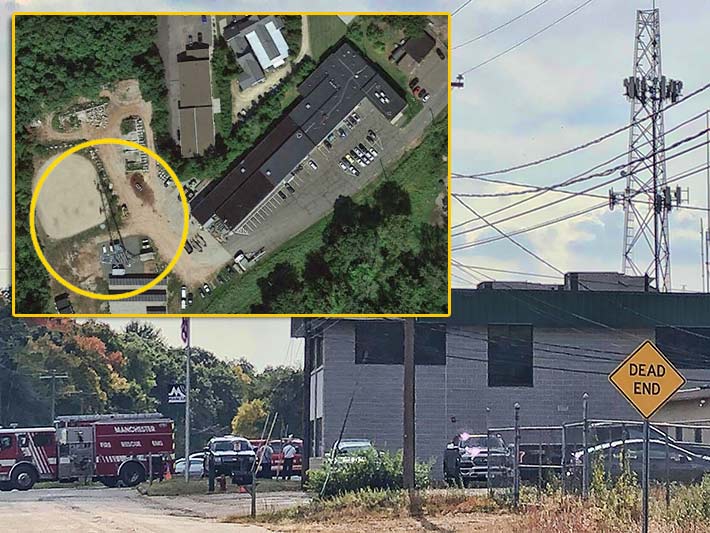 UPDATE: September 29, 2020 – Services have been announced for Matthew Vincent Clark, 34, of Brooklyn, CT, who died Friday, September 25, 2020 in Manchester. He was the son of Bruce and Kathi (Robinson) Clark. Matthew was the beloved husband of LeAnn (Larrow) Clark. They were married on April 25, 2009 in Canterbury. He also his daughter, Ava Clark, age 10; and his his son, Gavin, age 5.

Calling hours will be Thursday, October 1, 2020 from 5:00 to 7:00 p.m. at Gagnon and Costello Funeral Home, 33 Reynolds Street, Danielson, CT. In lieu of flowers donations may be made on Go-Fund Me.

September 28, 2020 –  A 34-year-old tower technician died Friday afternoon in Manchester, Connecticut, after he fell from an 80-foot self-supporting tower owned by Marcus Communications, located on the southwest side of their 50,000 sq. ft. facility at 33 Mitchell Drive.

Police responded to the scene at 2:30 p.m., according to their Tweet, and found the tower climber unresponsive and he was pronounced dead. They also said that OSHA was on the scene investigating the workplace fatality.

In a media statement, Marcus Communications said, “We are sad to learn a tower climber fell from our communications tower this afternoon.” The company noted that their firm did not employ the deceased.

According to two sources knowledgeable about the fatality, the tower technician, who had been climbing for several years, was employed by Roadrunner Installation Services at 1050 Buckley Highway, Union, Connecticut.

The long-established tower erection and maintenance company, owned by Wayne Kemp, reportedly had a three-person crew changing out a two-foot microwave dish and transmission line at the top of the self-supporting tower when the man fell.

Kemp did not return multiple requests by Wireless Estimator for additional information.

According to a Go-Fund-Me page, the deceased has been identified as Matthew Clark.

The Tower Family Foundation has been reaching out to the industry for contact information for Clark’s family to assist them during their time of need.

Clark’s death was the second fatality this year. Eight fatalities were recorded in 2019.