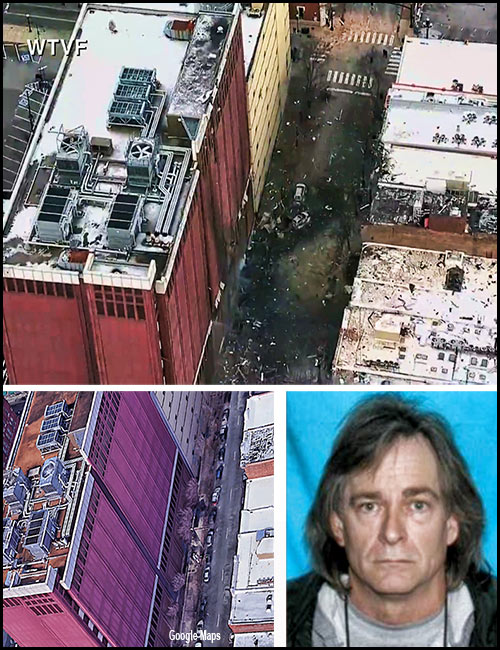 Anthony Warner, above, was identified by DNA to have been in the RV on Christmas morning when it exploded directly in front of the AT&T building in Nashville. Investigators are trying to identify the reason for the suicide bombing. It is not known if cell site transmitters were housed on the floor beneath the roof and the antennas had been blown away following the explosion, or if the nearest AT&T cell site was atop the AT&T 33-story building a little over a block away, the tallest office tower in Tennessee, with spires reaching 617 feet.

Law enforcement officials are not certain if 63-year-old Anthony Quinn Warner’s motive for driving his RV to downtown Nashville, Tennessee Christmas morning, allowing himself to be shred to pieces as the vehicle exploded on Second Avenue North was because he believed that 5G technology was killing people. Still, the former IT worker’s alleged belief appears to be their best lead.

Douglas Korneski, the special agent in charge of the FBI’s Memphis field office, told ABC News investigators “are aware of certain things online, and we’re looking at every possible motive.” That includes whether Warner believed “5G technology was being used to spy on Americans,” WSMV reported.

Nashville Mayor John Cooper said the bombing appeared to be an “infrastructure” attack, with the AT&T building being the primary target.

“To all of us locally, it feels like there has to be some connection with the AT&T facility and the site of the bombing,” Cooper told CBS News’ Face the Nation.

Former assistant director of counterintelligence at the FBI, Frank Figliuzzi, believes that the bombing has provided an explicit advisory for the nation.

“I think this is a wake-up call and a warning for all of us about how vulnerable our infrastructure is, how relatively easy it is for a single individual to do this,” Figliuzzi told Face the Nation.

Authorities are searching Warner’s electronic devices taken from his duplex home and will be able to identify his involvement and interest in 5G conspiracy theories.

The explosion damaged the AT&T building, causing widespread service outages that continued on through the weekend. The explosion affected some cell service across parts of Tennessee, Kentucky and Alabama, and hindered the communication of 20 or more 911 call centers.

At 8:30 a.m. this morning, the carrier said that the majority of services have been restored and adequate power is available on most floors of the building. They said they still have 11 mobile cell sites running in the region to support customers and first responders.

Warner thought he’d be “hailed a hero” for targeting a huge AT&T network, according to multiple media reports. 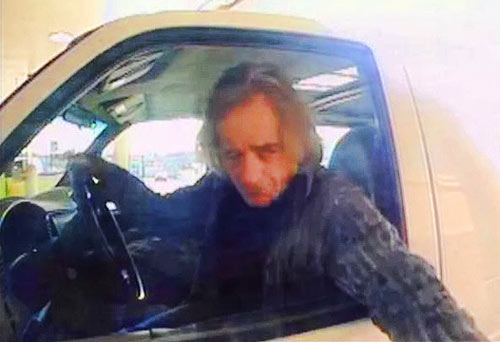 The FBI released today an updated photo of Anthony Warner. It appears that he is in a van, not the RV he owned and used for his suicide mission. According to AP, Warner’s neighbor last week casually asked him, “Is Santa going to bring you anything good for Christmas?” He said Warner smiled and then said, “Oh, yeah, Nashville and the world is never going to forget me.”

His father, Charles B. Warner, spent his career working for BellSouth, which was acquired by AT&T in 2006, Newsweek reported. The dad — who was nicknamed Popeye — died in July 2011 of dementia, aged 78.

The FBI is looking to see if there is a nexus between Charles Warner’s BellSouth employment and Warner’s suicide bombing.

Prior to its detonation, the RV played an audio recording warning residents to evacuate the area — as well as the classic 1964 Petula Clark pop song Downtown.

Warner owned an electronics business called Customs Alarms Electronics in Nashville from 1992 to 1998, according to state records.

In a press statement yesterday, AT&T said they suffered significant damage in the blast.

“That facility includes connection points for regional internet services as well as local wireless, internet and video. In the hours that followed the explosion, our local service remained intact through temporary battery power.”

Unfortunately, they said, a combination of the explosion and resulting water and fire damage took out a number of backup power generators intended to provide power to the batteries.

“What has made network restoration so difficult is doing it while maintaining the integrity of an active crime scene in cooperation with federal and local law enforcement. Hundreds of employees – our own AT&T employees as well as first responders – have stepped in over the last two days to restore service,” the company said.