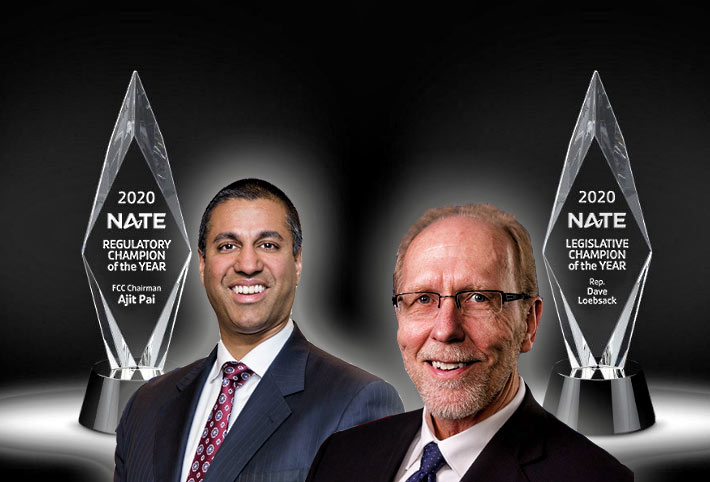 Chairman Pai was honored with the 2020 NATE Regulatory Champion Award. During his tenure, he has played a leading role shaping policies that have led to a successful broadcast repack transition, a streamlined regulatory environment surrounding the deployment of 5G technologies, unleashing access to spectrum bands critical to next generation networks and helping close the digital divide by expanding broadband connectivity to rural, unserved and underserved areas of the country. These actions will directly benefit NATE member companies working on the front lines of deployment for years to come.

Additionally, Pai participated in a tower climbing experience and visited the headquarters of numerous NATE member companies in order to gain a first-hand perspective of the safe work practices, diverse skill sets, knowledge base and work-ethic that are required of today’s tower technicians to conduct wireless deployments.

Congressman Loebsack received the 2020 NATE Legislative Champion Award. As a senior member of the House Energy and Commerce Subcommittee on Communications and Technology, he championed important communications and workforce development legislation. Of particular importance, Loebsack was the original sponsor of the bipartisan Communications Jobs Training Act proposal, which NATE helped to develop, and for which the telecom industry continues to advocate. Like Pai, Loebsack has also collaborated with NATE member companies, and participated in a tower-site tour in his Congressional District.

“Chairman Pai and Congressman Loebsack are worthy recipients of these awards and recognition due to their hands-on leadership and steadfast support of policy issues important to NATE member companies and the industry,” said Director of Legislative & Regulatory Affairs Jim Goldwater. “It was important to NATE to honor Mr. Pai and Mr. Loebsack in 2020 as their distinguished public service careers come to a close. Their strong efforts to advance needed policy initiatives are good for us as well as for the American people,” added Goldwater.