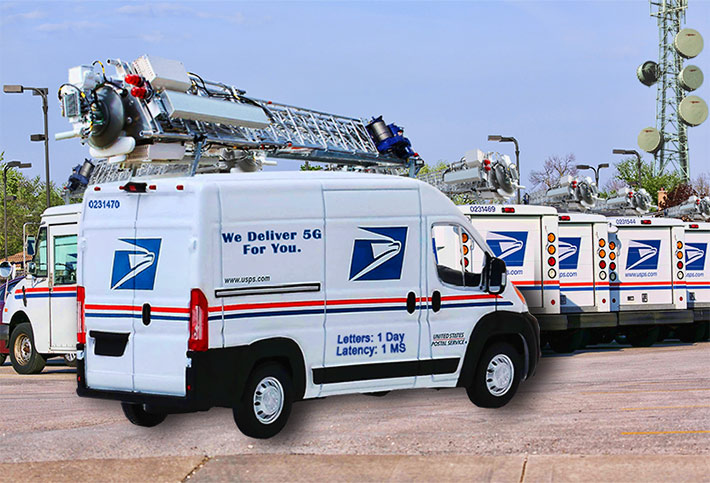 The United States Postal Service will play an integral role in collecting data on wireless broadband service throughout the country since their carriers provide service to almost every home in America. However, it’s unlikely that the USPS will take any more responsibility in rolling out 5G other than provide facilities for equipment and towers as they embrace a revised motto: “Neither snow, nor rain, nor latency…”.

The United States Postal Service currently leases space at 62 locations to telecom providers for their wireless towers that provides $1.4 million in annual revenue, but according to a report from the U.S. Postal Service Inspector General, there’s no reason that can’t be easily expanded to many of their 8,000 facilities that they own nationwide.

The report also promotes their ability of putting cell sites on top of their more than 31,000 facilities.

Also, they acknowledge that the USPS could work with businesses to explore leasing indoor space for edge computing, bringing cloud computing resources closer to end users to speed up data transmission and processing.

“Locating computing power closer to consumers may be essential for realizing the full benefits of widespread 5G. Not all postal facilities will be able to host servers, but some post offices and some of the over 280 mail processing facilities may offer viable colocations with edge computing providers,” the report said.

“Data on nationwide connectivity are an important component of federal efforts; specifically, influencing the distribution of federal funds. Likewise, to effectively leverage federal facilities for broadband deployment, service providers need platforms to learn what assets are available for a particular project. USPS would be able to play a role on both these fronts by harnessing its assets to facilitate data collection efforts and by making facilities data available to potential partners,” the report said.

“In fact, the Broadband Deployment Accuracy and Technological Availability (DATA) Act, which became law in March 2020, requires the Federal Communications Commission to test the feasibility of working with USPS for data collection. USPS could potentially leverage its delivery network that reaches nearly every neighborhood to support wireless broadband data collection, which in turn would better inform policymakers’ decisions.”

The report acknowledged that 74 percent of their buildings are leased and the lease terms may be an impediment to communications infrastructure deployment.

The report found that there are 2,364 USPS facilities located within census blocks that are unserved or underserved in terms of broadband connectivity. Three hundred and ninety three of these facilities are owned by USPS, and these may prove simpler for pursuing broadband partnerships than leased facilities.