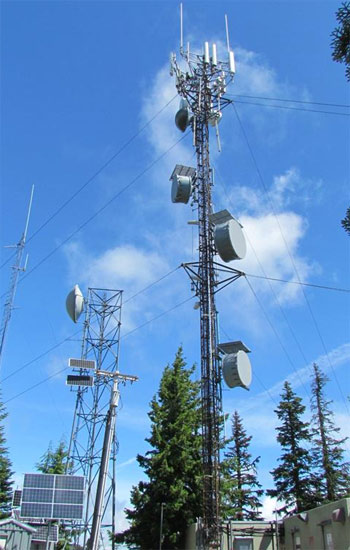 Although surrounding trees provide a scenic look to the communications towers on Halls Ridge, their inability to be removed endangers vital emergency communications

Although American Tower Corp. and other towercos skated damage as flames licked their towers on Mount Wilson in California late last month, the Beachie Creek Fire in Marion County, Oregon on September 8, 2020, wasn’t kind to the tower owner as it ripped through a 120-foot guyed tower’s compound.

The Oregon Department of Transportation captured the moments before the area was completely burned in a video that was recently released.

An Oregon DoT spokesperson informed Wireless Estimator that the camera at the end of the 2-minute, 17-second video proceeded to melt and lose transmission as the raging inferno destroyed the area that provided telecommunications services for numerous providers.

News reports incorrectly stated that the tower was owned by the DoT.

American Tower did not reply to requests to assess the damage the fire caused to the structure sitting approximately 4400 AMSL.

The fire gives a rare glimpse as to the power of a wildfire.