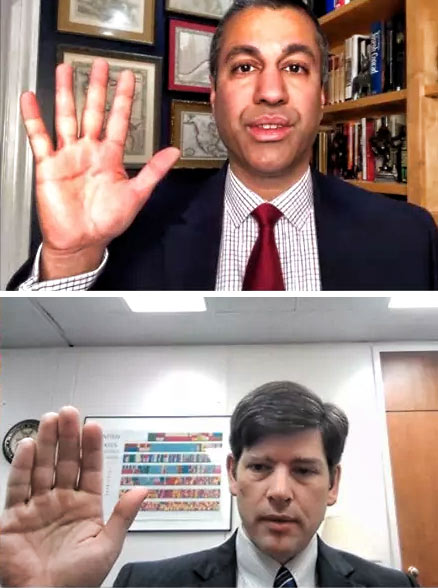 Nathan Simington officially became an FCC Commissioner yesterday after he was sworn in by FCC Chairman Ajit Pai.

The ceremony was a virtual event since the FCC continues to work remotely due to COVID-19 concerns.

His five year term was back-dated to July 1, 2019 when Commissioner Michael O’Rielly’s term was scheduled to end. O’Reilly was nominated for another five year term, but President Trump axed the nomination and nominated Simington who was confirmed by the Senate last week over strong objections from Democrats.

Simington is a proponent of repealing Section 230, a clause within the 1996 Telecommunications Act that protects internet companies such as Facebook and Twitter from liability on account of their users, an issue that troubled O’Reilly and most likely led to his falling out of favor with President Trump.

Simington brings both private and public-sector experience to the Commission. Previously, he served as Senior Advisor at the National Telecommunications and Information Administration where he worked on many aspects of telecommunications policy, including spectrum allocation and planning, broadband access.

His swearing in has the ability to deadlock the FCC  with two Republicans and two Democrats after Pai leaves on Inauguration Day, January 20, 2021.