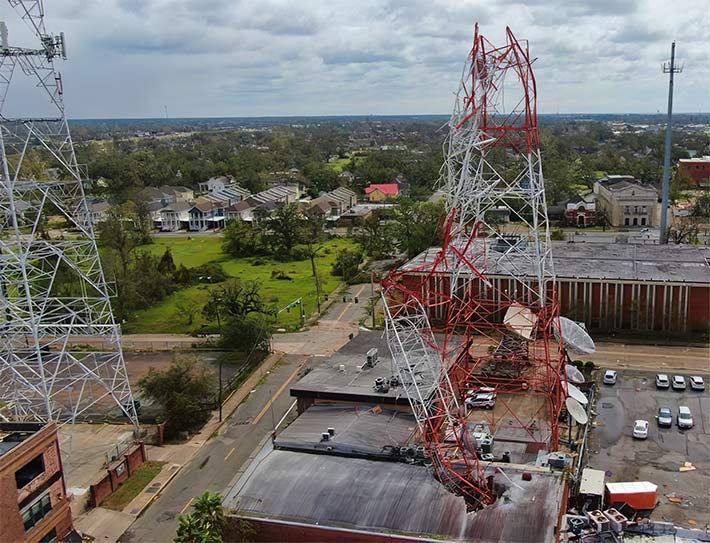 SURVIVAL OF THE FITTEST? KPLC’s tower was snapped in two, spearing the top half into the Lake Charles, Louisiana TV station’s studio.  Fortunately, the studio was not being used to provide Hurricane Laura coverage. The tower transmits the station’s signal to its main tower 25 miles away. A tower to the left of the studio and a monopole to its right remained standing. Oftentimes, no matter what a tower’s wind speed is designed for, hurricanes can produce crippling tornadic effects that will bypass almost adjacent structures. (Photo: KPLC) 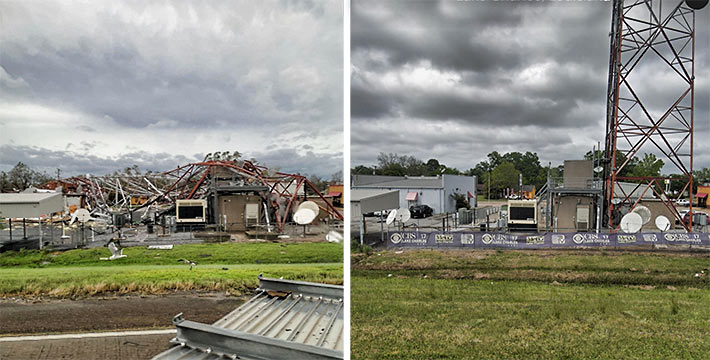 BEFORE AND AFTER – Hurricane Laura yesterday morning collapsed the Lake Charles, Louisiana broadcast tower of CBS station KSWL. No injuries were reported. FCC data has identified that eight Louisiana cell towers were damaged and Calcasieu Parrish had 76% of its cell sites out.

UPDATE – August 29, 2020 – Louisiana, Hurricane Laura’s hardest hit state, had a marked improvement since yesterday of the number of cell sites down, totaling 9% versus 15.2% in the effected parishes.

Cell sites out due to power were at 164 versus 339. Industry observers expected today to be worse than Friday, but the utility companies quickly responded to area outages, benefitting from minimal flooding.

August 28, 2020 – Laura, one of the strongest hurricanes ever to strike the U.S., blasted across Louisiana on Thursday, collapsing two television station towers in Lakes Charles and decimating Calcasieu Parrish’s mobile coverage. 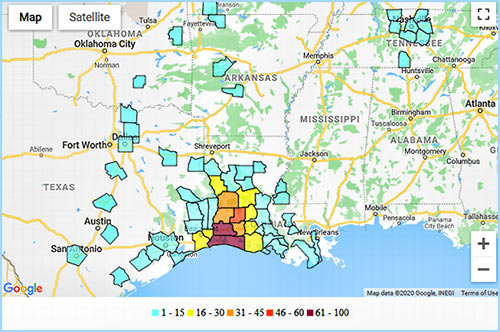 Reports indicate that wind speeds hit a high of 150 miles per hour when it first made landfall.

Hardest hit was Lake Charles located in Calcasieu Parrish, where it was reported that 76% of its cell sites were down, representing 140 locations of 185 total sites. Seventy-one were down due to transport issues with 53 out due to power. Eight sites were out due to damage.

In Louisiana, 8.2% of available cell sites in the affected area were down, representing 380 locations of 4,650 sites. However, many parishes were unaffected by Laura.

The hardest-hit parishes were Allen, Beauregard, and Cameron, with over 40% of their sites being out.

It is expected that today’s FCC report of cell site outages in Louisiana will increase since there are still over a half-million power outages. Texas is also struggling with outages at 129,000.

Wireless Estimator will update the mobile statistics this afternoon.

“It is clear that we did not sustain and suffer the absolute, catastrophic damage that we thought was likely,” Louisiana Gov. John Bel Edwards said. “But we have sustained a tremendous amount of damage.”