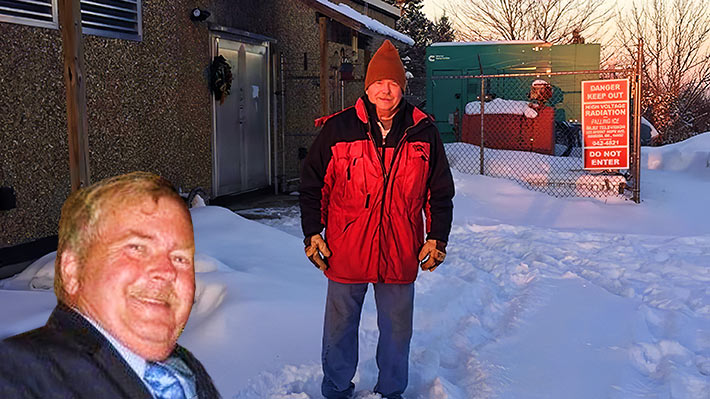 James Larner standing in front of his beloved WLBZ transmitter building. He was faithful and reliable and always answered the call whenever he was needed, station management said. Photo: NCM; Inset: Facebook

The Knox County, Maine Sheriff’s Office has confirmed that a Bangor resident fell from a ham radio tower in a residential area of Union.

Authorities said that at approximately 1:00 p.m. yesterday, James Larner, 74, was on the structure when he fell, according to a friend who was on site when the accident occurred off of Olson Farm Lane.

He was a part-time engineer at WLBZ NEWS CENTER Maine where he started in 2003.

“Jim was a lot of fun, always happy to talk, share a story. A smart, hard-working, real Maine guy. One of those people the audience never sees, but whose work was critical to them being able to watch TV for many, many years,” NEWS CENTER Maine reporter Don Carrigan wrote in an email to NCM’s staff.

Wireless Estimator will provide services information when it becomes known.

Although Larner was wearing a harness and reportedly using a lanyard, and might have had climber safety training, many ham operators do not and typically every year there is a ham-related death.

In 2019, on June 14, a 62-year-old ham operator died when a tower collapsed while he was changing out a guy wire in Pennsylvania. The following month a 52-year-old New Hampshire ham radio enthusiast was killed when the ham radio tower he was dismantling collapsed.

Industry safety professionals have long held that amateur radio operators, no matter how safe or proficient they may think they are, are not when it comes to their knowledge regarding climbing, maintenance, erection and disassembly of structures, and should contact professionals for guidance.