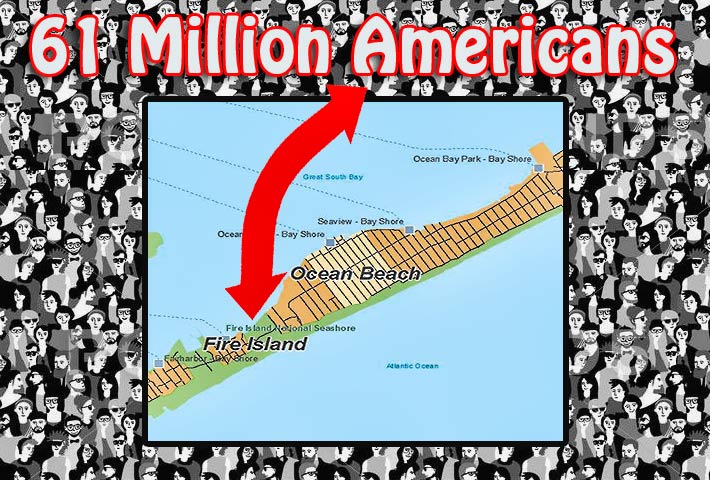 At one point the company said that it served 61 million Americans, but in reality the ISP served primarily Fire Island, NY

In a revised March 2018 filing, and in September 2019 and March 2020 filings, BarrierFree apparently reported having vastly more broadband subscribers than there were housing units in the Suffolk County, New York census tracts where it reported providing service. The company also apparently failed to submit its March 2019 broadband deployment data Form 477 filing, provide accurate responses to Letters of Inquiry issued by the Commission’s Enforcement Bureau during the course of its investigation, and fully respond to those Letters of Inquiry.

Serving 61 million Americans was a slight embellishment
Commissioner Jessica Rosenworcel approved the fine, but questioned why the agency’s staff reached out to BarrierFree 27 times and gave BarrierFree a pass when it still failed to file the proper forms.

She noted that at one point the company claimed that it offered service to 61 million Americans, including every census block in Connecticut, Maryland, New Jersey, New York, Pennsylvania, Rhode Island, Virginia, and Washington, DC.

”This would make it the fourth-largest provider of broadband in the country—from a company that provides service largely in one county in New York,” Rosenworcel said in a statement.

In order to reach all of these area, Barrier Free would have to build or lease new circuits covering hundreds of thousands of times its actual service footprint, the FCC said in its NAL.

The company’s website provides minimal information, but BarrierFree is advertising for a part time attorney to support their compliance and regulatory programs and a field service technician for Fire Island.

In proposing this fine, the Commission also explained that BarrierFree apparently failed to file any Form 477s before 2018, even though the company had been offering service since 2004, and vastly overstated its broadband deployment in its original March 2018 Form 477 filing. However, the Commission noted that those apparent violations of Commission rules fell outside the one-year statute of limitations.

Complete, accurate, and timely broadband deployment and subscription data are essential to achieving the Commission’s mission to close the digital divide and bring broadband to those areas most in need. Broadband service providers are required to provide coverage and subscribership data to the Commission every six months on Form 477, a requirement that has been in place since 2000.

Broadband deployment data also are essential to the Commission’s statutory obligation to assess whether advanced communications services are being deployed to all Americans in a timely manner, and provide valuable information to other federal agencies, state governments, and individual consumers.

The proposed action, formally called a Notice of Apparent Liability for Forfeiture, or NAL, contains only allegations that advise a party on how it has apparently violated the law and may set forth a proposed monetary penalty. The Commission may not impose a greater monetary penalty in this case than the amount proposed in the NAL. Neither the allegations nor the proposed sanctions in the NAL are final Commission actions. The party will be given an opportunity to respond and the Commission will consider the party’s submission of evidence and legal arguments before acting further to resolve the matter.