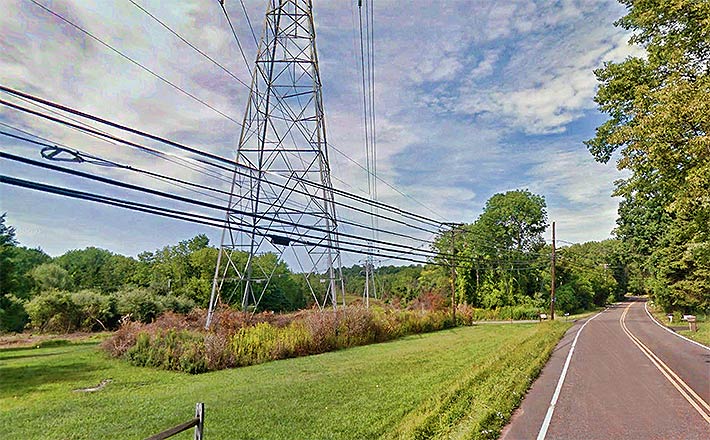 Verizon was turned down by a New Jersey township for a cell site atop a power transmission tower in a corridor pictured above. After negotiations it was approved, but an adjacent resident appealed the approval unsuccessfully two times

An Alexandria Township, N.J. homeowner has lost his legal battle against Verizon placing cell antennas atop a power line tower adjacent to his property.

Glenn Fodor, who lives on Route 579, appealed the approval of the township’s Land Use Board on December 21, 2017 before the Hunterdon County Superior Court, to allow 12 antennas on top of the 150-foot power line tower. With the antennas and a lightning rod, the tower would be about 174 feet tall.

On June 1, 2017, the Zoning Board voted four-to-two to approve the requested variances for the Verizon site. However, that margin of approval was inadequate since approval required the “affirmative vote of at least five members” of a municipal land use board under the Municipal Land Use Law

Three months later Verizon filed suit challenging the denial of its application as “capricious, and unreasonable.”

The township and Verizon then held discussions that resulted in a settlement in which Verizon agreed to modify its plans.

The Land Use Board then unanimously approved the application following a hearing.

Fodor then filed his lawsuit to set aside the approval. The trial court dismissed Fodor’s complaint, finding it lacked merit, according to court documents.

The court also noted the “substantial uncontroverted expert testimony” in favor of the project, and the “significant changes” that Verizon made to the plans after failing to garner the necessary votes before the Zoning Board.

In his appeal, Fodor argued that the Land Use Board was obligated to give special deference to the Zoning Board’s earlier non-approval.

They also noted that, “In particular, telecommunication antennas appended to preexisting structures have generally been considered in a more favorable light under land use principles than the construction of new towers.”

The appellate decision is available here.