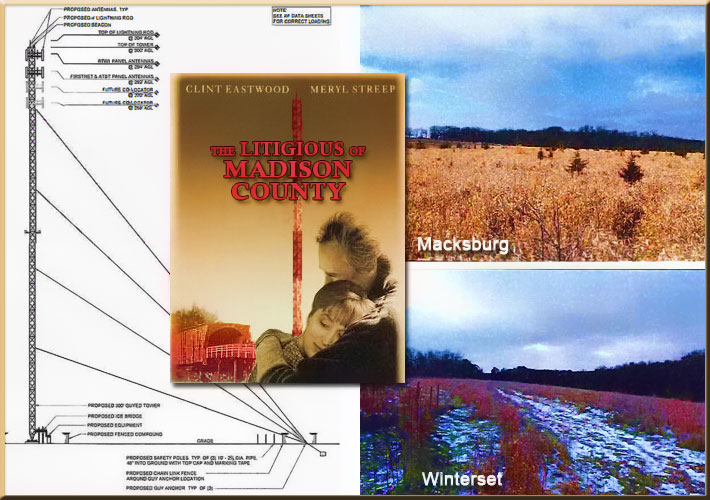 The Madison County, Iowa Board of Adjustment provided no documentation why they denied AT&T and FirstNet the ability to construct a 300-foot guyed tower in Macksburg and Winterset. The site’s developer filed a lawsuit last week.

In the 1995 movie Bridges of Madison County, Merrill Streep and Clint Eastwood fell in love at the Roseman covered bridge in rural Winterset, Iowa. A quarter-century later, AT&T and FirstNet wanted to erect a 300-foot guyed tower four miles away in an agricultural area that required cell phone coverage.

However, Madison County’s board of adjustment on August 4 wasn’t amorous to the idea of putting the tower on a 100-by-100-foot leased farmland property off of Burr Oak Ave. and denied the special use permit required.

The reason they provided, according to a lawsuit filed last Thursday by the site development firm Cloud 1 Services LLC of Wisconsin, was simply they had reviewed all of the information and decided the tower wasn’t able to receive a conditional use permit.

They also denied a similar structure proposed to be erected in Macksburg, again without any justification or reasons, Cloud 1 Services alleges.

The complaint asks the U.S. District Court of the Southern District of Iowa to provide an expedited review and declare that Madison County and its board of adjustment violated the Iowa Cell Siting Act and that all approvals necessary for zoning, construction, and operation of the towers be granted.

Previous to the board of adjustment’s actions, on July 16, 2020, the county’s zoning commission voted to deny both applications. However, their recommendation to the board is not a final action.

The county’s zoning administrator, according to the lawsuit, said that there are no minutes available for that meeting.