Last year, Uriah King was a standout running back for the Brownwood, Texas Freshman Lions and looked forward to a junior year of equally outstanding achievements. 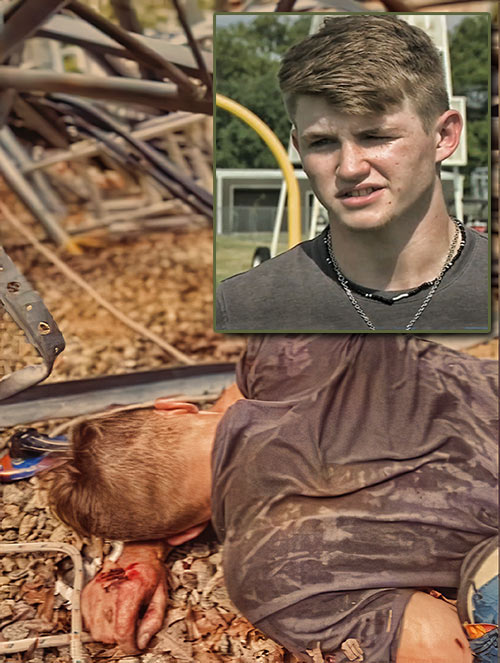 Uriah King, after falling over 200 feet after a guyed 359-foot tower collapsed in Alabama, is anxious to get back on the gridiron. Photos: KTXS 12

But on June 1, while the tower tech was at approximately the 225-foot level on a 359-foot tower while disassembling an AT&T antenna mount in Seale, Alabama for Texas-based King Strong Tower Enterprises, the rigging reportedly failed, dropping the mount on a guy wire and collapsing the tower.

Miraculously, King was attached to the tower and rode it down as it pretzeled in the compound area below and survived, although he suffered numerous pelvic fractures and broke his left ankle and right tibia.

After multiple operations, King is on crutches and supports the Brownwood Lions as they begin to practice, a team that he was expected to start for as an outside linebacker.

When a reporter from KTXS 12 asked him if he plans on playing again, the junior said simply, “I will.”