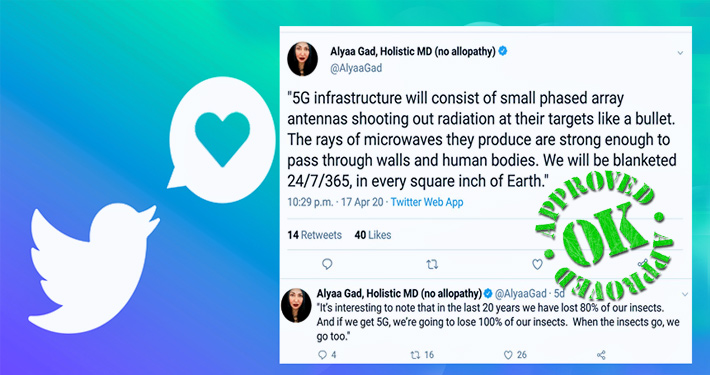 Although the author of this Tweet appears to have what Twitter might identify as a large-scale disorder, their post will likely receive its approval because it didn’t specifically request that inebriated invertebrate lovers set fire to a cell site to save America’s short supply of insects, most of which currently live inside monopoles.

Twitter has added conspiracy theories to their ever-increasing list of unverified coronavirus claims that are grounds for removal.

“We have broadened our guidance on unverified claims that incite people to engage in harmful activity, could lead to the destruction or damage of critical 5G infrastructure, or could lead to widespread panic, social unrest, or large-scale disorder,” Twitter announced.

Examples they cited were: “The National Guard just announced that no more shipments of food will be arriving for two months — run to the grocery store ASAP and buy everything” or “5G causes coronavirus — go destroy the cell towers in your neighborhood!”.

Conspiracy theories about 5G technology have become a major concern, especially in the UK where there have been over 60 cell sites set on fire in the past month since it is being reported by Tweets and other social media posts that 5G transmissions are causing the virus. There have been no incidents in the U.S. that have been directly attributed to coronavirus claims.

According to a New York Times report, US intelligence agencies are worried that those with an interest in sowing panic among the US population are actively seeking to spread pieces of fake information regarding the pandemic.