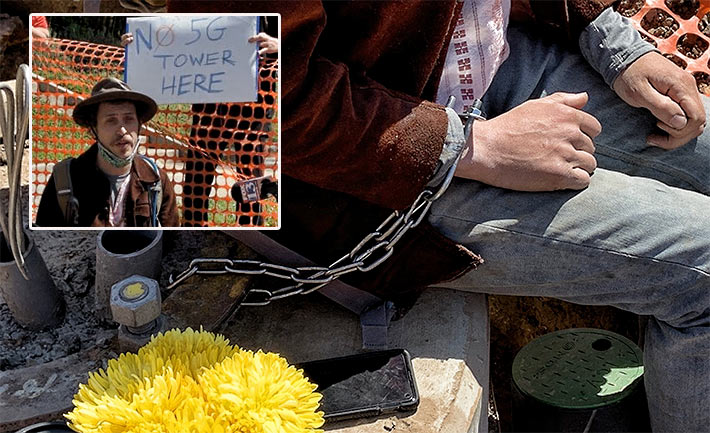 Although there were multiple cell site fires in Memphis, Tennessee, the most recent one on February 17, 2020, it is not known if they were coronavirus-related incidents. However, there are many 5G and tower siting protests throughout the country. Earlier this week, Salt Lake City, Utah resident David Schutt chained himself to a monopole foundation’s anchor bolt template to protest a site in construction, but released his U-bolt shackle when authorities arrived. Photos: Paul Nelson

Earlier this month it was reported that in the UK there were approximately five cell sites that were set on fire by individuals falsely linking 5G to COVID-19. That number has seen a dangerous increase to over 60 and Vodafone UK CEO Nick Jeffery is appealing to the vandals to end the attacks, especially in light of an incident where one mast was burned down that provided mobile services to Nightingale Hospital in Birmingham.

Vodafone has had approximately 20 masts destroyed by vandals recently, Jeffery said in a LinkedIn statement.

In his post, Jeffery said, “It’s heart-rending enough that families cannot be there at the bedside of loved ones who are critically ill. It’s even more upsetting that even the small solace of a phone or video call may now be denied them because of the selfish actions of a few deluded conspiracy theorists.”

“Burning down masts means damaging important national infrastructure. In practice, this means families not being able to say a final goodbye to their loved ones; hard-working doctors, nurses, and police officers not being able to phone their kids, partners or parents for a comforting chat.”

“There is absolutely no link between 5G and coronavirus. There is no science based evidence 5G is harmful to human health,” Jefferey said.

UK regulator Ofcom is also concerned about fake news being spread. After receiving 755 complaints that a morning TV program on April 13 contained potentially harmful comments about an alleged link between the Coronavirus and 5G technology, the agency quickly investigated the viewer concerns and offered guidance on Monday.

Ofcom cautioned the station and said that “discussions about unproven claims and theories which could undermine viewers’ trust in official public health information must be put fully into context to ensure viewers are protected. These responsibilities are especially important when ongoing events – such as mobile phone masts in the UK being attacked – risk significant harm to the public.”

Regarding complaints about broadcast journalism in the US, the FCC states that its authority to respond is narrow in scope, and the agency is prohibited by law from engaging in censorship or infringing on First Amendment rights of the press.

The FCC states that the agency can only act only when it has received documented evidence, such as testimony from persons who have direct personal knowledge of an intentional falsification of the news. Without such documented evidence, the FCC generally cannot intervene.