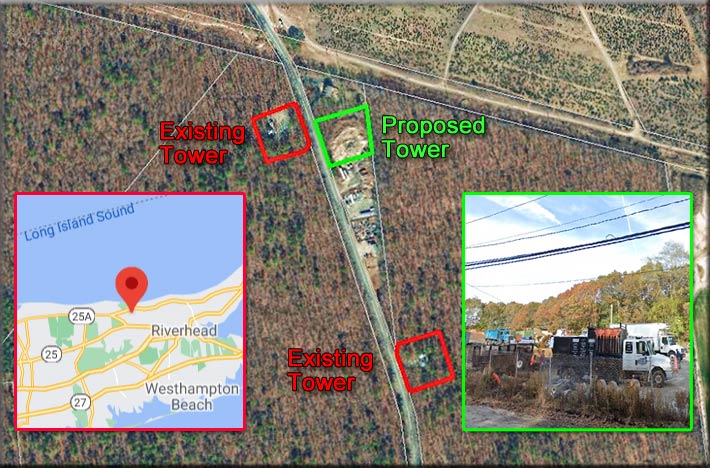 Neighboring landlords are concerned that if a new tower is built on the same road by Crown Castle they’ll lose their tower and rental income.

Crown Castle Towers, AT&T, and Sprint have brought a federal lawsuit against the Town of Riverhead, N.Y., the Town Board, Zoning Board of Appeals, Planning Board and the Town’s building administrator for alleged “unreasonable delays” and “unsupportable  effective denials” of their application to erect a 120-foot monopole.

The template nature of the complaint, in part, is similar to the many dozens of lawsuits throughout the country that rely upon the FCC’s Shot-Clock order’s requirement of 150 days to take action on an application.

However, this lawsuit is unique since it has two current landlords of nearby towers that Crown Castle manages just a stone’s throw from the proposed structure, muddying the application and Riverhead’s Zoning Board of Appeals stating that Crown Castle should “renegotiate a lease with the existing property owners.”

An existing structure owned by AT&T is managed by Crown Castle and the company said it could not get a long term lease for the past 10 years with the owner, Simak Associates, and Crown Castle is currently operating on a month-to-month tenancy.

Crown Castle said it has also been unable to reach satisfactory terms for the second tower owned by Sprint on land leased from Lizam Associates. Their lease expires on March 1, 2027.

Crown Castle has stated that since the existing facilities support important communication services it is vital that long-term agreements/leases with the property owners are in place to prevent a site from having to be removed without having a replacement site, thereby creating a gap in coverage.

According to Crown Castle’s application, the existing towers will be removed upon completion of the erection of the new monopole.

In July, the town board determined the project would not have a significant adverse environmental impact on the approximately one-acre leased area.

On January 21, Crown Castle was granted setback variances in a verbal approval but the  ZBA conditioned its consent that the company had to provide covenants for the Simak and Lizam’s sites that would preclude them from building replacement towers.

In its complaint, filed on February 18, Crown Castle says those conditions are “unreasonable, illegal, arbitrary and capricious” because the ZBA was “well aware that the applicant would be unable to obtain the restrictive covenants” it required.

Imposing that condition was an “effective denial” of the application that is not based on substantial evidence in the written record, Crown Castle stated in the complaint.

Crown argues that the ZBA’s resolution ignores the town code’s limitation on preexisting towers and fails to acknowledge that should Simak or Lizem actually seek to build new towers on their properties after the existing facilities are removed, the new towers would be required to comply with the town code, therefore requiring all of the requisite approvals.

The ZBA resolution, according to Crown Castle, makes the unsupported claim that the benefit sought by the applicant’s variances could be achieved by some other means because the applicant could negotiate a lease with the existing property owners.

During a ZBA hearing, according to the lawsuit, Mehrdad Kohanim made a public comment that he was in opposition to the application but admitted that he is part of the Simak ownership group that owns the AT&T tower lease and would lose rent if the proposed facility is approved. Kohanim also threatened to build a new tower on his property if the applicant removed the existing structure.

Matthew Seal, Director of Real Estate for Crown Castle informed the ZBA in a letter that Crown Castle has the legal authority to remove the existing towers and relocate the equipment to the proposed monopole.

Crown Castle says in the complaint that the town’s failure to approve the application by February 1 constitutes an “unreasonable delay” under the federal Telecommunications Act.

Crown Castle is asking that the court provide an order and judgment ruling that the town violated federal laws and regulations and mandate that the town issue all permits to begin construction. They are also seeking unspecified damages, costs, attorneys’ fees, and interest.