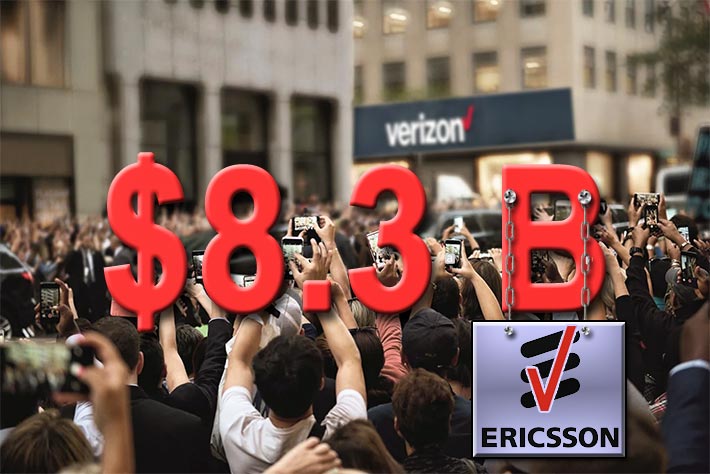 Ericsson saw a considerable drop in revenues from China where approximately 10% of its revenue was generated, but Verizon’s $8.3 Billion deal with the Swedish company lifted its financial outlook.

Ericsson has announced a landmark multi-year $8.3 Billion agreement with Verizon to provide its industry-leading 5G solutions to accelerate the deployment of Verizon’s world-class next-generation 5G network in the U.S.

The  deal came just in time since China, where Ericsson gets about 10% of its revenue, has cut the amount of their $6 Billion 5G rollout awarded to Ericsson to about 2%, compared with about 11% last year.

The Swedish company had been expected to get a lower share of China’s 5G roll-out after Sweden elected to exclude Chinese vendors from its own networks.

Nokia announced today that it had won its first 5G radio contract in China. Although it did not provide the amount, multiple media outlets said it was about 4% of the $6 Billion.

China has been ahead of all other countries in deploying 5G networks, making it one of the biggest markets for telecom infrastructure companies.

Niklas Heuveldop, President and Head of Ericsson North America, says: “This is a significant strategic partnership for both companies and what we’re most excited about is bringing the benefits of 5G to U.S. consumers, enterprises and the public sector. We’re looking forward to working with Verizon to leverage solutions like Cloud RAN and our Street Macro, adding depth and versatility to 5G network rollouts across the U.S.”

“With this new agreement, we will be able to continue driving innovation and widespread adoption of 5G,” says Kyle Malady, Chief Technology Officer for Verizon. “We are pleased to continue this work through our long-standing relationship with Ericsson.”

Ericcson said in March that its consolidated capital spend for full year 2021 is expected to be between $17.5 billion and $18.5 billion, consistent with their prior year.

They said their focus for the year includes further expansion of their 5G Ultra Wideband Network in new and existing markets, densification of their network to manage future traffic demands and continued deployment of their fiber infrastructure.”

In 2020, Verizon was the first communications service provider to receive a commercial 5G mmWave Street Macro base station from Ericsson’s award-winning new state-of-the-art U.S. smart factory in Lewisville, Texas. Ericsson is committed to building and accelerating the nationwide build-out of 5G across the country.