If you’re performing an upgrade or installing 5G small cells in Takoma Park, MD, especially near Westmoreland Ave., double check your JHA to ensure that all of your safety measures are spot on, or you could be spotted by former Deputy Assistant Secretary of OSHA Jordan Barab who is on the prowl in his neighborhood for worksite violations. 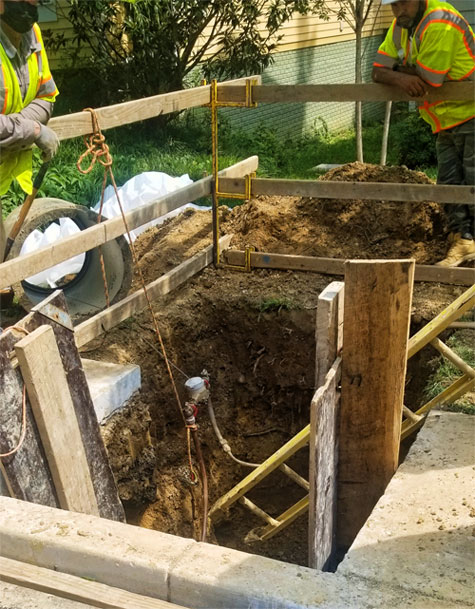 NEIGHBORHOOD OSHA WATCH — Former Deputy Assistant Secretary of OSHA Jordan Barab is prowling his community in search of flagrant OSHA violations. He inferred in a Tweet that this trench was 10 feet deep. Although the photo he took could be misleading, it appears, according to the ladder rungs to be closer to less than 5 feet which would not require a protective system if a competent person decided it wasn’t necessary.

This morning, Barab saw a trenching crew and Tweeted: “WTF! Is it just my neighborhood where people are down in 10ft deep trenches without shoring or up on roofs without fall protection?”

He said that he called Maryland OSHA on the contractor and they responded a couple of hours later, as they do “every time I’ve contacted them.”

He later Tweeted: “Think I have a future in workplace safety?”

Barab is well versed on wireless construction and used cell tower construction fatalities as an example for strengthening the multi-employer work site doctrine.

He served as Acting Director of OSHA for nine months until David Michaels was appointed and held the agency’s reins for seven years.

During the Obama administration, Barab was the Deputy Assistant Secretary at OSHA from 2009 through January 2017. Both he and Michaels were proponents of heavy-handed enforcement that viewed employers as adversaries rather than as partners in protecting employees.

He served as Senior Labor Policy Advisor in the U.S. House of Representatives, Education and Labor Committee from 2019 through this April.

Today, he has a blog and provides safety consulting, and part-time pro bono site inspections.

WTF! Is it just my neighborhood where people are down in 10 ft deep trenches without shoring or up on roofs without fall protection? I don’t think so.

Can OSHA get to these worksites if citizens like us don’t call them? Definitely not. pic.twitter.com/UkemYwVY3Z