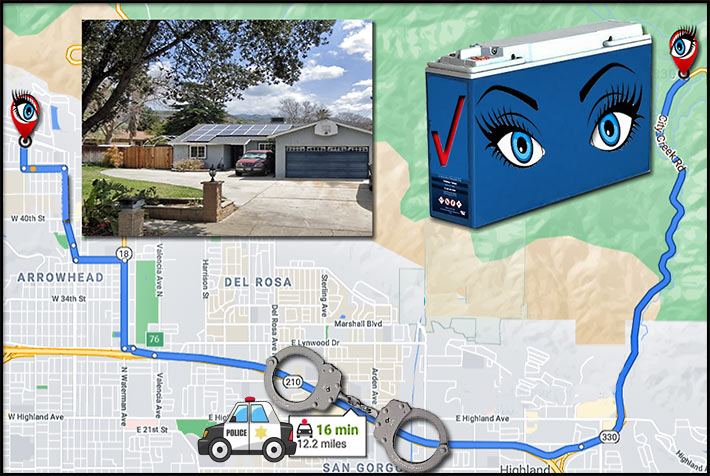 RECALCULATING BAIL – Even if officers patiently waited at all traffic signals and observed the posted speed limits, they would have been able to make an arrest in 16 minutes after leaving the scene of the crime. The apprehension tip was in the chip.

A 32-year-old man was arrested for allegedly stealing four deep-cycle batteries which were used to power a San Bernardino, California Verizon cell tower site, according to the San Bernardino County Sheriff’s Department.

On January 14, a suspect cut two padlocks to access the cell towner site at 17101 State 330 Highway. Unbeknownst to the thief, the batteries were equipped with GPS tracking devices.

McFarlane was arrested and booked into Central Detention Center on charges of grand theft and possession of stolen property. Bail was set at $25,000 for the alleged theft, but no bail was set for a felon possessing a gun.

The batteries were recovered and returned to Verizon.

Some carriers are using GPS enabled batteries that are automatically triggered when they are removed from an enclosure, rack room or shelter, alerting the NOC through text and email notifications.

Persons who know of any related criminal activity or any additional information regarding this case are asked to contact the Central Station at (909) 387-3545. Persons can remain anonymous by contacting We-Tip at www.wetip.com or calling (909) 987-5005.