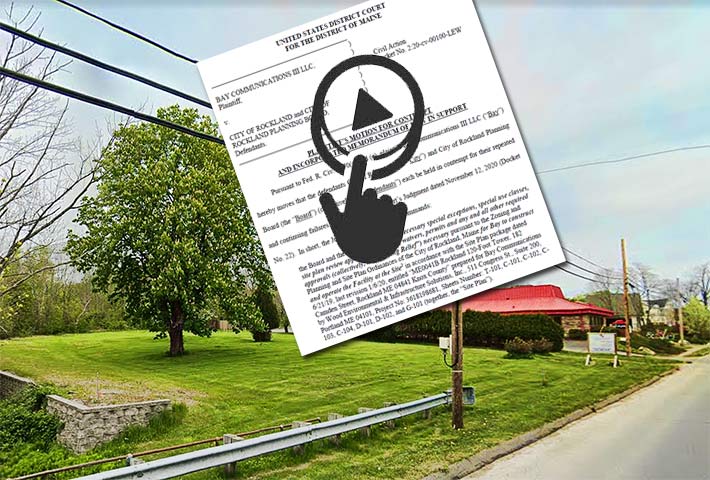 Bay Communications is asking for $1,000 a day for punitive damages from Rockland, Maine for delaying the court-ordered construction of a 120-foot monopole at this Camden Street location

Bay Communications III LLC of Mansfield, Massachusetts wants to erect a 120-foot monopole on 182 Camden Street in Rockland, Maine and has had to resort to asking a federal court to find the city and its planning board in contempt of court for failing to follow through on a negotiated settlement reached in a November 12, 2020 U.S. District Court Judgment.

Bay Communications is asking the court to fine the city $1,000 for every day it fails to grant approval for the cell tower. In addition, if approval is not granted by February 4, the company wants Rockland to pay $77,038 to the company for its costs.

If that fails to get the city to approve the cell tower, the company is asking the court to appoint “another person” at the city’s expense to approve the project as detailed in the negotiated settlement.

“Despite the clear and unambiguous terms of this Court’s Judgment, the fact that the Judgment was a result of a fully negotiated Agreement for Judgment between the parties, and the passage of more than two months, the Board and the City have now repeatedly refused to grant Bay the Zoning Relief explicitly ordered by this Court,” Bay Communications states in its complaint.

On January 4, according to Bay Communications, the city’s code enforcement office acknowledged receipt of the company’s building permit but indicated that no action on the application would occur until the zoning board granted the necessary approvals.

The following day, the zoning board met to consider those approvals required under the court’s judgment.

Instead, the board voted to send a memorandum to the city council asking that the board be allowed to consult with another attorney that would represent it and its interest, according to Bay Communications.