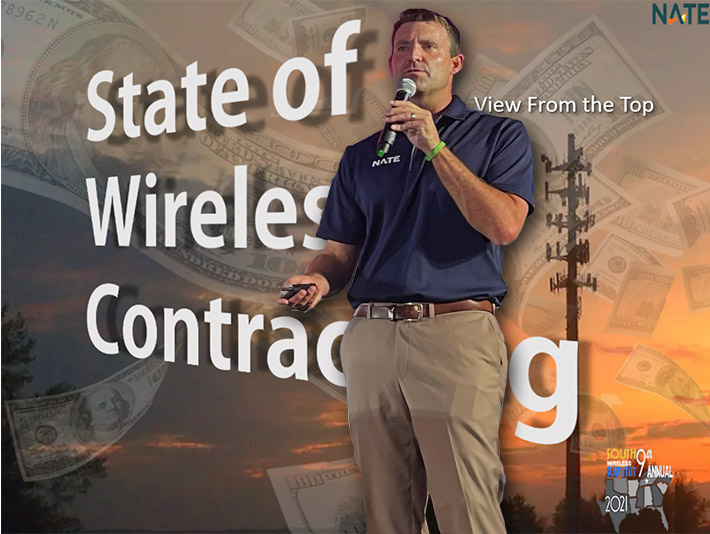 NATE President and CEO Todd Schlekeway said, “Maybe we need to talk about more funding going to the contractor pool in this country and getting creative with some of the funding mechanisms available through government agencies, through congressional actions. It’s not an easy environment to be in right now.”

Downward pricing pressure and costly vetting demands from carriers and other top-tier clients over the years have undermined the ability of many wireless contractors to remain profitable.

It’s a frequent topic of concern and conversations typically end with no solutions or guidance and are renewed each year when turfing vendors and other customers set a new percentage price reduction that companies must adhere to or step aside.

Reminiscent of Howard Beale’s famous line in the movie Network: ‘I’m as mad as hell and I’m not going to take this anymore!’, NATE: The Communications infrastructure Contractors Association, like Beale did in 1976, opened a window of opportunity at yesterday evening’s keynote address at the South Wireless Summit and said contractors are being squeezed to a breaking point and can’t take it anymore.

NATE President and CEO Todd Schlekeway surprised many attendees who expected a promotional overview of how contractors are deploying the nation’s dynamic networks but instead received a salvo of concerns that the industry is facing with Schlekeway stating, “NATE is committed to banging this drum a little louder.”

Rose-colored glasses need to be removed

“When we go to these conferences, sometimes it’s sunshine and lollypops, but I’m here to tell you based upon the feedback I get from our members every day that there are some challenges when it comes to the contracting space,” explained Schlekeway.

“Despite the dynamic industry we’re in, we can’t paint rose-colored eyeglasses over everything.”

Schlekeway emphasized that NATE, first and foremost, is dedicated to safety, and “when the margins get squeezed, what gets cut? Too often, it’s the safety and the culture of safety within that company or organization.”

He said he has personally seen where safety has been compromised.

“Maybe we need to talk about more funding going to the contractor pool in this country and getting creative with some of the funding mechanisms available through government agencies, through congressional actions,” Schlekeway said.

In his presentation, he posed a rhetorical question, “Is wireless contracting becoming untenable in the United States?” His answer: “Unfortunately, yes!”

“The ecosystem we’re in is outstanding. But it’s a chain of command, and we need every layer of that chain to be strong and healthy for this industry to survive.”

“We talk so often about bridging that digital divide, beating China in 5G, but these are issues that we might want to take a look at first.”

He highlighted the problems contractors were having with payment terms and other crippling issues that could have contractors folding up shop or switching to more profitable work (see slides below).

There are workable solutions, Schlekeway said.

“We need to start talking to our members of congress, government agencies, and have top tier client engagement with the major customers in the industry.”

In his lengthy rant, Beale said, “I don’t want you to write to your congressman because I wouldn’t know what to tell you to write.”

NATE does know and will write to legislators, as well as champion their contractor-members’ plight. 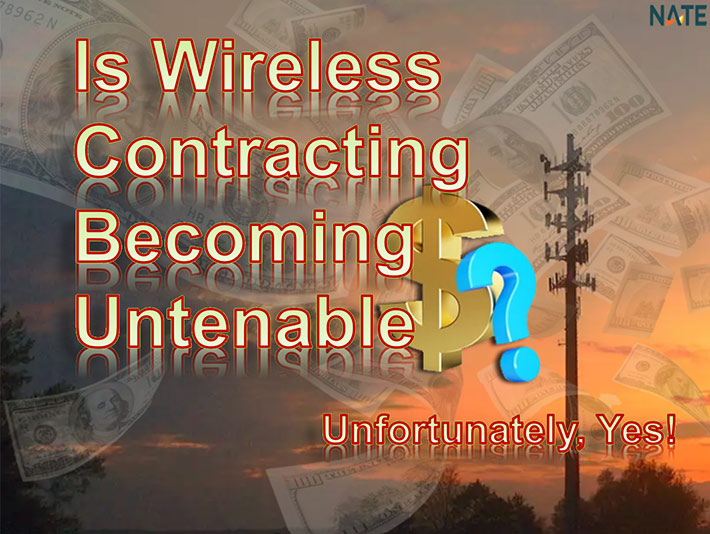 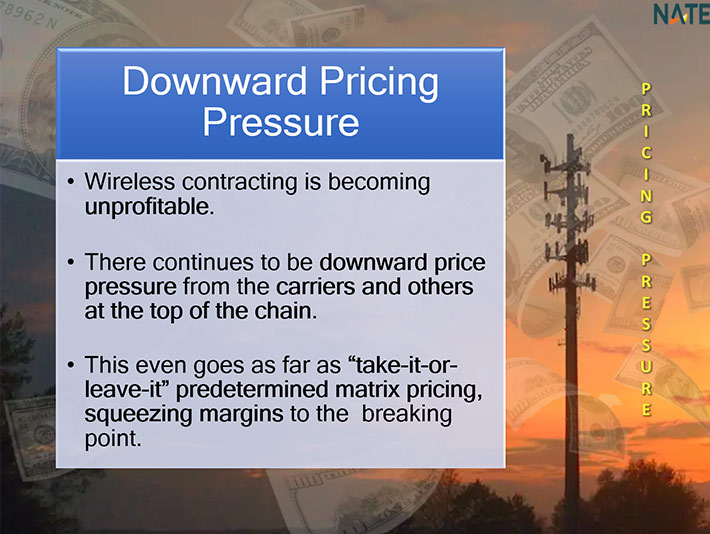 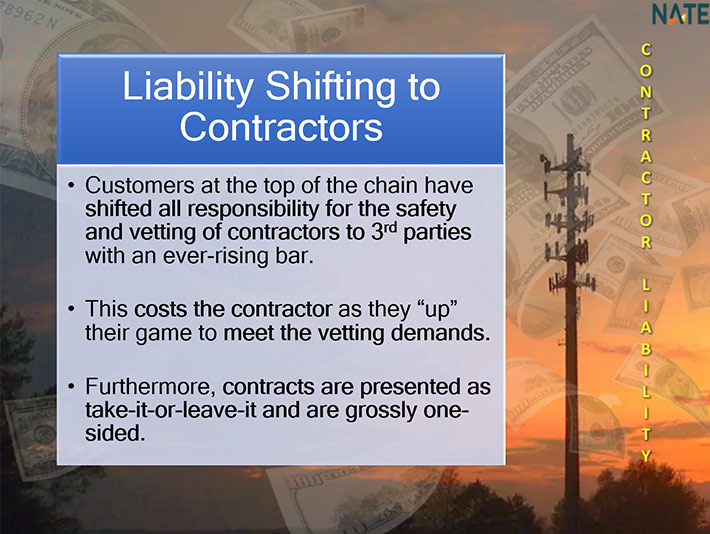 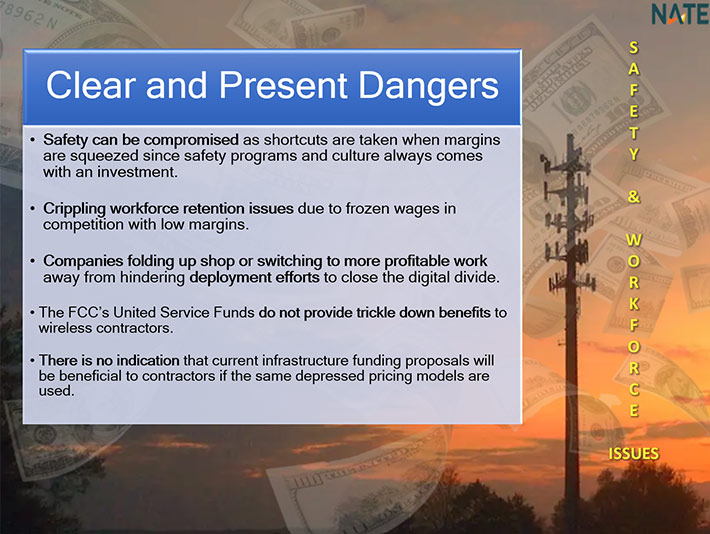 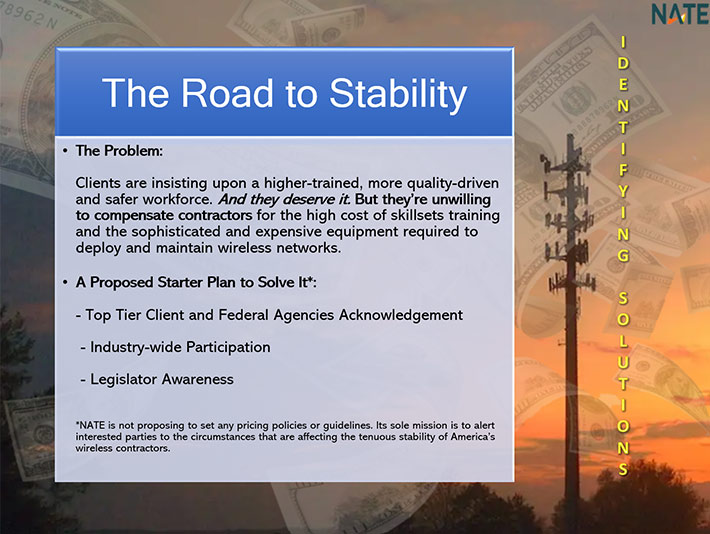