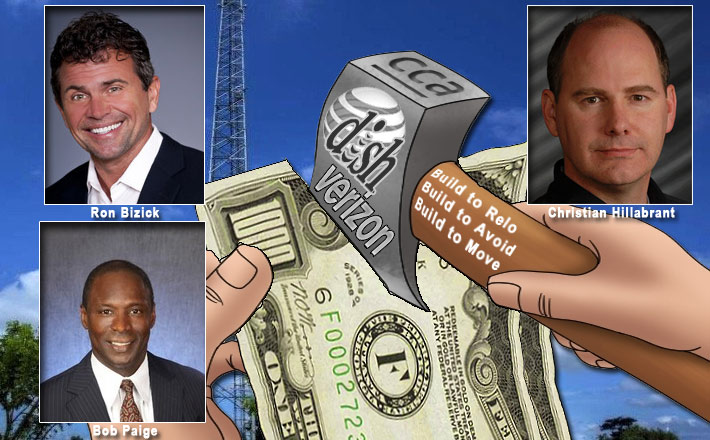 When towerco executives interact during a panel discussion, it’s expected that they’ll present an uplifting message to the audience, nodding to investors to join in their spiritual-like carrier campfire song. 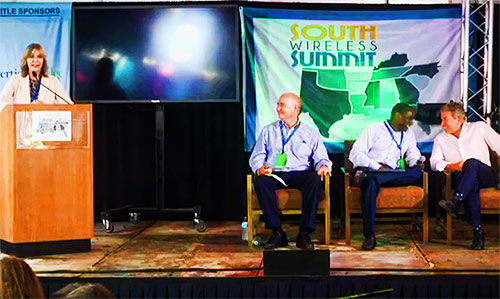 A Tuesday presentation proved to be an exception.

Tillman is currently building sites in most states across the U.S. near existing assets to assist AT&T, Verizon, Dish Network, and smaller towercos within the Competitive Carriers Association with lower lease pricing than currently being provided by the major tower companies.

In 2017, Verizon and AT&T announced a joint agreement that would have Tillman building hundreds of new macro sites.

Much to do about nothing?

Tant asked Paige if the build to relo — also known within the industry as the build to avoid, build to move, and build to go somewhere else — affects the macro tower infrastructure world?

He shrugged it off, stating, “It’s much to do about nothing, and I think that has been borne out over the last two or three years. We built a few. I’m sure Christian has built a few, but it’s really not a topic of conversation that we spend a lot of time on.”

He said it grabs great headlines in the press, “but as a reality, there is not much going on.”

Tillman’s website identifies that it built its first tower in May of 2017 and two years later had completed 499 more macro structures. Today, based upon owned towers registered in the FCC’s database, the company has 995 constructed towers and 574 locations in their build pipeline that have been granted.

“I think Bob is right; this is largely a game that could be played really, really well in square states and places where zoning permitted you to build a tower or where there wasn’t any zoning. There are only so many of those that exist today. I also think that the folks that were being adversely affected by these programs got smart, put a war room together, and protected their assets as much as they could,” said Bizick.

“The worst of it has passed for those that it has affected, and those opportunities become fewer and farther in between when you are densifying a network and building everything out in densely populated areas where they need sites,” added Bizick.

In Florida, Vertical Bridge and Tarpon Towers’ corporate backyard, the FCC database shows that Tillman only has two monopoles that have been approved to be built, whereas in Texas, they own 408  towers with only a handful not constructed.

Tillman says they’ll continue to be overly aggressive in overbuilding

“I’m going to be the contrarian here,” Hillabrant said. “I think this is a huge opportunity, and although our business today is equally split between coverage and capacity and what we call HRR – high rent real estate – we are actively building for several of our customers. And I’ll tell you, more importantly, if you wind back the clock 20 years ago and you looked at the network cost as it existed, about 80% of the cost was sitting with the transport providers and the rent of the sites, and then 10% for headcount and 10% for everything else. That was the OPEX pie back then.”

“You have fiber operators that are becoming very competitive, you have people being modernized with tools and processes, but at the end of the day, the rents haven’t changed. They continue to go up. Our thesis is, if you come up with simple, transparent pricing for the customer where they see the cost of the tower and they pay a fixed percentage of that, and you give them a low escalator, and you give them condo rights, that is a hugely attractive proposition.”

Hillabrant said that because Tillman has good ties with the four major carriers, he would “expect to see a lot of movement in this area over the next couple of years because this is one area from a cost perspective that the industry has not been able to crack.”

“We see this as a very valuable space to be in, and we’ll continue to be overly aggressive in areas where we can overbuild.”

It’s a race to the bottom

Possibly identifying Tillman, Bizick said, “I think there are irresponsible actors out there that see brand new towers in the search ring or very close by, but then put a piece of steel up in the air. It’s now a race to the bottom, and nobody’s business really works. And the carriers are just fine, I’m sure, but the tower companies and their investors, not so much.”

“I would just like to point out that I think largely the build to relo and the  overbuilds were directed at people that aren’t in this room and I think largely the carriers have had great success at getting master lease agreements with the people in this room so that we’re quote, unquote, friendly. And I think that as tower companies we, need to be a bit more responsible to each other as independent tower companies and not ruin a really good business model.”

Paige said that the carriers were not remarkably busy during the last four or five years.

“They substantially completed their 4G buildout; 5G wasn’t here yet. They had time to tinker around with high-cost sites and tuning the network. Now with 5G new spectrum being deployed, this is going to move to the back burner for the carriers because they got work to do. Right? They focus on this stuff when they really don’t have work to do and they have to keep people busy. I see a lot less build to relo and build to avoid because they have real work to do which is deploying 5G.

Disagreeing with Paige, Hillabrant said, “I think 5G capex continues to be a huge issue in the industry, and it’s not going to go away. And ultimately, you’re right. It’s not the friendly tower companies that are doing overbuilds, it’s those intransient tower companies that have absolutely dug in their heels and said, ‘Look, we don’t care if you add equipment or take equipment off the tower, we’re going to raise your rent. And that’s just not sustainable. Those are the guys who are going to lose over the long term with the destructive players in this industry.”

The three panelists said that they were bullish on 2022, and Hillabrant said that he anticipates that it will be the best year Tillman has ever had.

Regarding mergers and acquisitions, Paige said, “A couple of years ago when prices were a third less than they are today, I said, ‘the industry was priced to perfection’. Today, I will tell you that M&A is priced to absurdity. We’re very selective in the market today just because the models don’t make sense.”

He said Vertical Bridge was “sitting on the sidelines for the most part.”