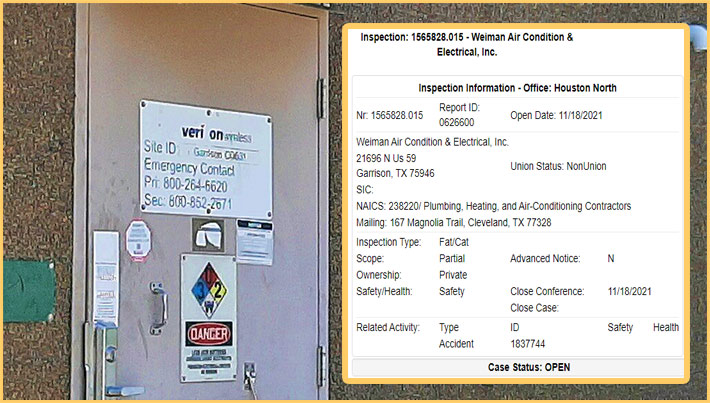 OSHA will be investigating a company that was dissolved in 2019 that was awarded a Verizon build, and was using a NAICS classification of 238220: Plumbing, Heating and Air Conditioning Contractors.

OSHA has identified the contractor they are investigating following the death of a Texas tower technician, Steven Rankin, 53, after falling from a tower on November 17 in Garrison, TX, as reported yesterday by Wireless Estimator.

The inspection information released this morning states that Weiman Air Condition & Electrical, Inc. was the contractor that was managing the Verizon installation project when the fatality occurred. According to an individual knowledgeable of the incident, a representative from Weiman was not on site when Rankin fell.

Rankin was reportedly a 1099 worker, as were two other individuals installing sector antennas.

According to corporate information, Weiman Air Condition & Electrical Inc., located at 167 Magnolia Trail, Cleveland, TX, was incorporated in 2006 but was dissolved on August 2, 2019. The latest corporate event was a change in status from ‘Forfeited Franchise Tax’ to ‘Forfeited Existence’.

Jeffrey Weiman is listed as the company’s agent, and according to his Facebook page, his employment began on January 1, 2019.

Weiman did not return a request for additional information.

A wireless contracting company, Panama Equipment, also operates from Weiman Air Condition & Electrical, Inc.’s address. The company states on its website that it provides turnkey wireless services. On its Facebook page in an October 19 post, Panama Equipment said it was looking for tower and civil crew contractors.

Company information identifies that Jeffrey Weiman is the company’s manager and treasurer.

Two days following the November 17 Garrison fatality, the firm’s manager and vice president, Nicholas Field, was removed as the company’s manager and as a director. Richard Ford, Panama Equipment’s manager and secretary, was also released as a governing person.

The company, which was incorporated in 2007, did not respond to a request from Wireless Estimator for additional information.

Samung’s oversight might be in the shadows of mismanagement

As reported yesterday, it is unknown who the prime contractor for the Garrison installation was, and it might have been a Samsung-managed project.

Samsung has not responded to a request for information.

Multiple contractors have informed Wireless Estimator that Samsung’s pricing for Verizon projects was too low and unacceptable, and they have turned down providing them with services.