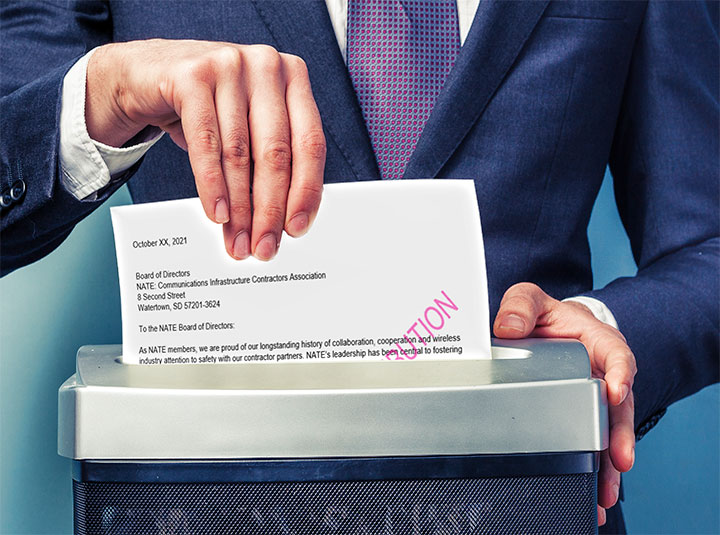 One carrier who received the draft letter to NATE informed Wireless Estimator that it didn’t represent their position and they were not going to sign.

Commentary — One carrier’s well-thought-out solution to NATE’s concern regarding untenable contractor matrix pricing that is crippling the nation’s wireless workforce can be capsuled in two words: ‘Shut Up!’

There are no legitimate arguments that matrix or model pricing shouldn’t be used in wireless construction unless it’s a project that requires different disciplines or presents unique labor or material-intensive requirements outside of the typical scope of work.

It’s necessary to forecast CAPEX and assist management in ensuring a quality and safe installation.

It’s as American as – well – American Tower, the towerco that introduced model pricing in 2000.

In an article published by Crain Publications’ RCR Wireless News, the American Alliance of Contractors initiative was established to cull the best of contractors and in the process, volume and established pricing would actually allow them to be more profitable since they would not have to be competitive with low bid contractors who repeatedly failed to accurately scope the project.

Crown Castle had also been working on establishing matrix pricing and in 2001 introduced a similar Excel-based matrix that would be rolled out.

At a time when a squid was still seafood, some NATE-member contractors registered their concerns regarding the Tier 1 companies’ commodification of their employees’ services, but the trade group’s leadership did not address those apprehensions because they were more anecdotal than substantiative.

In fact, in reviewing Crown Castle’s model pricing in 2001, according to documents obtained by Wireless Estimator, two decades ago they were offering $21,000 to solely install 12 antennas and 12 lines, an equivalent today of about $32,800. No other services were required, but contractors would be paid, accounting for inflation, $3,400 for a sweep test. And if an ice bridge was required, add $8,800.

According to their model pricing program, today’s 6-Antenna, 9 RRU installation with H-frame assembly, installation of an ice bridge, meter box, conduit and trenching for power, fiber and alarms; grounding system; router configuration; green light testing, and multiple other requirements as well as supplying materials along with considerable closeout administration, warehousing and materials transportation, a comparable cost in 2001 would have been estimated at approximately $46,000 or more today for a Verizon 5G installation.

However, recent pricing being offered to contractors by Crown Castle for an installation in Dallas for that scope of work for a Verizon project is $18,980 .

This time, NATE is championing its core membership’s concerns regarding ‘take it or leave it’ matrix pricing in a full court press that began with a keynote presentation at the South Wireless Summit last June that was followed up with a stronger message in October when the trade group released a whiteboard video on October 11 that identified that depressed matrix pricing could endanger the nation’s 5G builds.

The video’s introduction was accompanied by a press release that stated that “The Association remains ready and willing to engage in the constructive dialogue necessary between the wireless carrier, turf vendor and vertical realtor executives and their teams to address the problems that affect the entire wireless industry ecosystem.”

Unfortunately, instead of reaching out to NATE, a carrier’s representative sent out a hastily drafted knee-jerk letter nine days later (see below) asking Tier 1 companies to join them in pressuring the Association into stepping away from their campaign about unsustainable matrix pricing.

A key carrier has informed Wireless Estimator that they were not going to sign the letter. One of the big four towerco’s also said that they would not be a co-author of the petition since it was “unproductive in addressing the problems of contractor and workforce shortages that are starting to come to light.”

Hopefully, other Tier 1 companies will see the letter for what it is, a collusive threat for maintaining the status quo instead of evaluating contractor concerns that could be resolved by those companies presenting new models that are fairer to their supply chain vendors at all levels.

The petition, which doesn’t address matrix pricing challenges, states, “…we believe recent public statements and social media posts by NATE and a small sampling of members are counterproductive and harmful to the entire network.” It also stated that discussing pricing would be disruptive to field crews and worker safety as well as morale.

It’s not explained what the ‘entire network’ is that’s going to be harmed, but what will be harmed are Tier 1 companies that will see a greater amount of contractors refusing to accept their ‘take it or leave it’ unprofitable matrix pricing.

Earlier this year, Verizon said it was moving from relying upon their long-established contractor partners in a number of markets and gave their builds to multiple turfing vendors. The result has been a 40% or more reduction in offered pricing.

A fatality on November 17 in Texas occurred on a Verizon project and speculation in social media that it was possibly due to a subcontractor having to work under pricing constraints is unfounded. However, what is known is that the contractor being investigated by OSHA had multiple 1099 tower techs on the 5G installation, a way for a contractor to reduce overhead to maintain a profit.

Nonetheless, what is troubling is the contractor appeared to be only licensed to perform air conditioning and heating services, according to OSHA.

The author’s statement that only a ‘small sampling’ of contractors are concerned is pathetic. The entire industry is concerned – which could be easily discovered if they reached out to their contractors – the best and most responsible approach to ensure the industry’s future.

They should also reach out to NATE for constructive dialogue. In case the author forgot, NATE is “The Communications Infrastructure Contractors Association,” with three of its contractor directors inducted into the prestigious Wireless History Foundation Hall of Fame for their industry leadership.

Since 1995, NATE has welcomed and enjoyed the participation of its support members, who also benefit from a strong, secure, safe, and quality-minded contractor workforce.

For over 26 years, NATE’s members have been charging hard in the right direction to benefit the industry at large. One carrier is foolishly trying to disrupt that tried-and-true relationship. 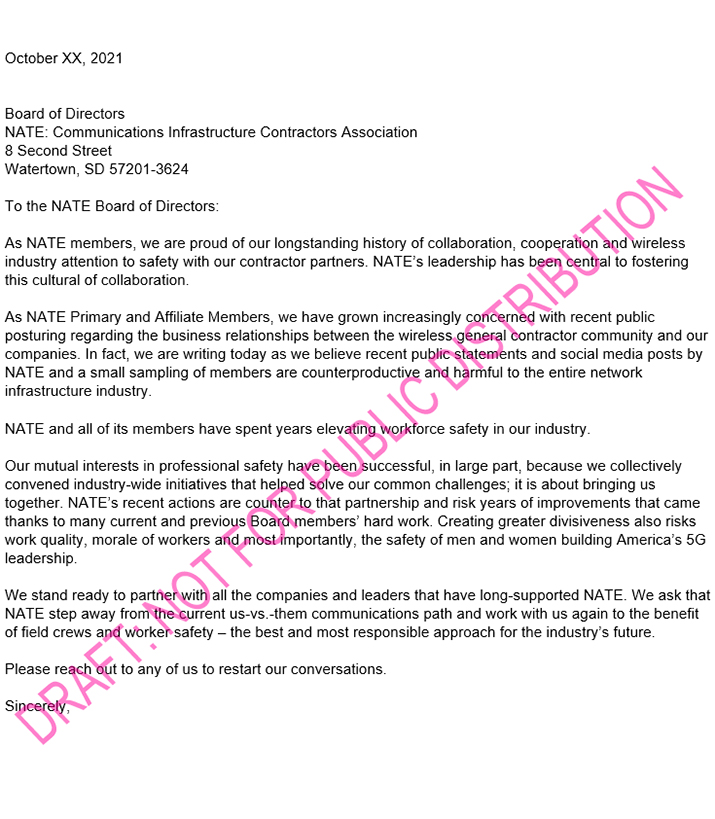