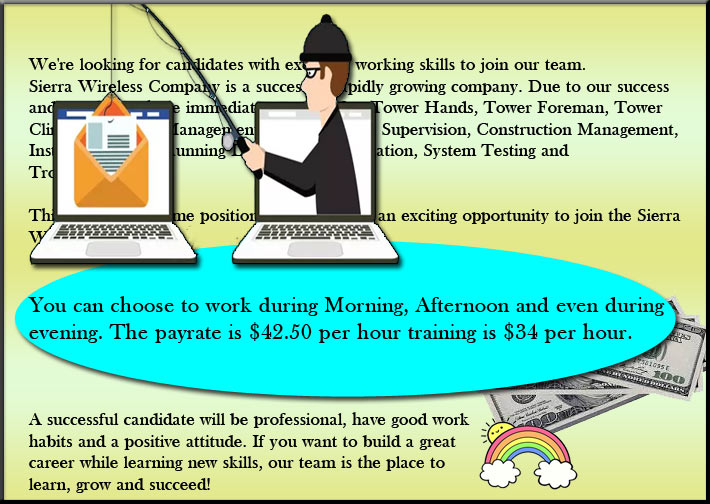 The fraudulent ads were removed after they were placed by an individual mirroring a legitimate company. Although it had ‘wireless’ in its name, it didn’t have any employees that would require the skillsets being solicited.

A con artist is making the rounds targeting wireless construction workers and trying to enlist them into a Skype interview to wrangle unsuspecting applicants out of money.

Wireless Estimator alerted viewers to a scam in 2019 where a tag-team of criminals would provide candidates with a fraudulent upfront check to purchase personal protective equipment and other gear necessary in order to be OSHA compliant upon the applicant’s arrival at a new project location,

They would then have to purchase the equipment from the scammer’s preferred vendor with their own funds.

The most recent ruse to swindle an applicant is not known because candidates, after applying, realized that the offering just didn’t make sense for a number of reasons, and they informed Wireless Estimator that they never went as far as an interview.

The advertisements, which have been removed, identified that the company was offering $42.50 an hour and if you weren’t experienced and needed training, you would start at $34.00 an hour, a princely sum for an off the street worker that would be earning close to $2,000 a week with a bit of overtime.

Also, another red flag identified the company’s HR representative as Jessie White with a non-conforming email address for the 1,300-plus employee company: hrdeskinterview2505@gmail.com.

If candidates were to view Sierra Wireless’ web site they would also note that the many offerings on their career page were not construction related.

But the dead giveaway in the advertisement was: “You can choose to work during Morning, Afternoon and even during the evening.”

If you’ve been a tower tech for two days you’ll have found out that you oftentimes have to work morning, afternoon and during the evening or you choose to be given grey dog bus fare.

Wireless Estimator contacted local authorities after discovering the 2019 scam to see if they could assist in monitoring and investigating the expected fraudulent check, but said that there was little they could do due to jurisdictional concerns and “our inability to catch these fraudulent scams that are frequently reported.”

According to the Better Business Bureau, these counterfeit check scams occur tens of thousands of times every week.

The real Sierra Wireless was the subject of a ransomware attack on its internal IT systems on March 20, 2021.