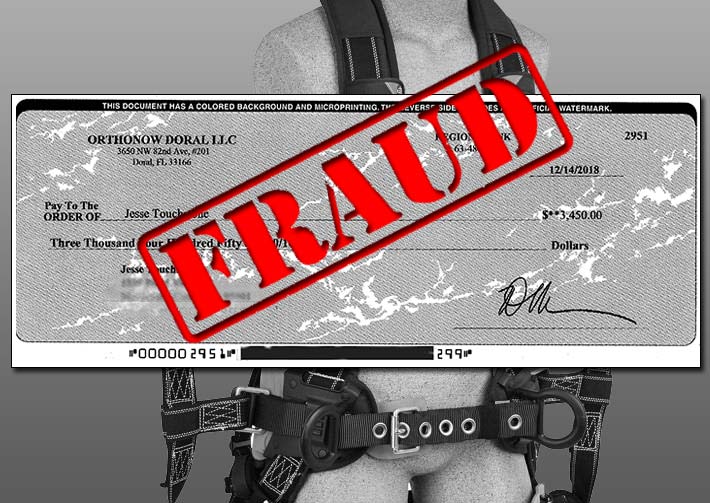 Tower techs and foremen are being solicited for new, high-paying positions by well-known companies and are provided a check for PPE, which later bounces

A tag-team of con artists representing that they are HR generalists from a Texas-based leading installation contractor, have been targeting job seekers for at least two months with a scam cloaked with a degree of believability because of their industry knowledge and their employment of a new twist as to why they’re willing to send the applicant a check for thousands of dollars.

In years past, according to multiple companies that Wireless Estimator contacted, tower techs, foremen and other construction workers have been taken for many thousands of dollars in a scam that follows this scenario.

An accomplice contacts the individual through a positions wanted board or through a fictitious employment ad. Displaying industry knowledge, they offer the open position and send a check that will cover their travel expense to fly them into market and provide a week or more of per diem.

Once deposited, the new-hire would receive a phone call within two days from the company’s HR representative informing him that he would have to fly out to a project city within a week and needed to immediately purchase his airline ticket by calling their preferred travel agency.

When contacted, the agency, most likely in the same boiler room or bedroom, would explain that due to the last minute itinerary, the airfare was considerable, and they would also be renting a pickup truck for the worker’s long-term use at the airport. Payment would be made through a Western Union or other transfer methods.

The applicant is pleased because the charges were less than the check he received, but a few days later the original check would bounce.

New scam wants to pay for the worker’s PPE
The newest evolution is an upfront check to purchase personal protective equipment and other gear necessary in order to be OSHA compliant upon the applicant’s arrival at a new project location.

In December, Jesse Touchstone posted his resume on Wireless Estimator’s positions wanted board and immediately received numerous inquiries. The one that seemed most promising came in a text from John R. Glenn whose telephone number was 774-593-3793, and he said he was a HR specialist the construction company.

Touchstone, who has six years of experience, was requested to do an interview using mobile app Hangouts with Karen Taylor for a foreman position.

He said that she used industry vernacular and the interview lasted over an hour, and he informed Wireless Estimator that he was anxious to learn if he would land the job.

He did. An extensive and professional offer letter on the contractor’s letterhead was emailed that included stock option information and other company benefits, and an hourly wage of $35.00, and $28.00 an hour during training. He signed and returned it.

Taylor said that Touchstone would be receiving a check to cover his PPE and other expenses so that he would be prepared to work at a new office they were opening close to his home in California, and he would be required to purchase the PPE from their preferred safety distributor.

The check in the amount of $3,450 was sent by FedEx from a shared office building in Tampa, Fla. and Touchstone became suspicious when the check, although authentic looking, came from Orthonow Doral, located in Doral, Fla., and not the contractor.

He took it to his local bank officer and was informed that it was fraudulent. He then contacted the contractor.

In the past five days, Wireless Estimator has been apprised of additional offers to wireless workers from the contractor as well as other well-established contractors.

The scammers, whose cell number is most likely from a burner phone from Provincetown, MA, are also targeting at least two military veteran-employment boards by posting fictitious tower climber job offerings. Wireless Estimator has informed them of the fraudulent activities. 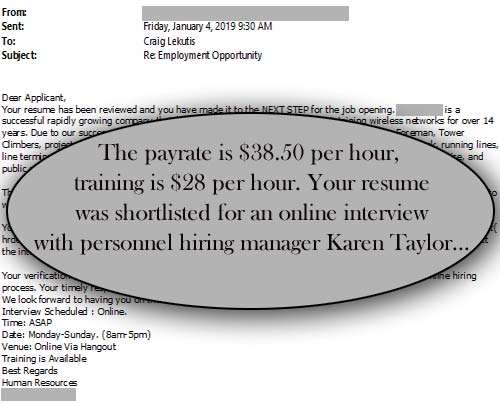 Wireless Estimator’s publisher, without providing a resume or identifying the position he was seeking, received a higher hourly offer than another intended victim who was offered $35.00.

Posing as a potential applicant, on Jan. 3, 2019, Wireless Estimator’s publisher contacted the spoofed email address for the contractor and expressed interest in employment.

The following day, the scammer sent back an email stating that his resume was shortlisted for an interview with Karen Taylor, although no resume or the position wanted was ever provided to Glenn. The initial offer was $38.50 per hour and $28.00 while in company training.

Local authorities were contacted to see if they could assist in monitoring and investigating the expected fraudulent check, but said that there was little they could do due to jurisdictional concerns and “our inability to catch these fraudulent scams that are frequently reported.”

According to the Better Business Bureau, these counterfeit check scams occur tens of thousands of times every week and as many as 500,000 Americans were burned in 2017 with the average loss at $1,200.

Prosecutions are minimal. The Federal Trade Commission states the best avenue for prosecution is to contact your state’s Attorney General.

They maintain that consumer education is the best defense to avoid being scammed.