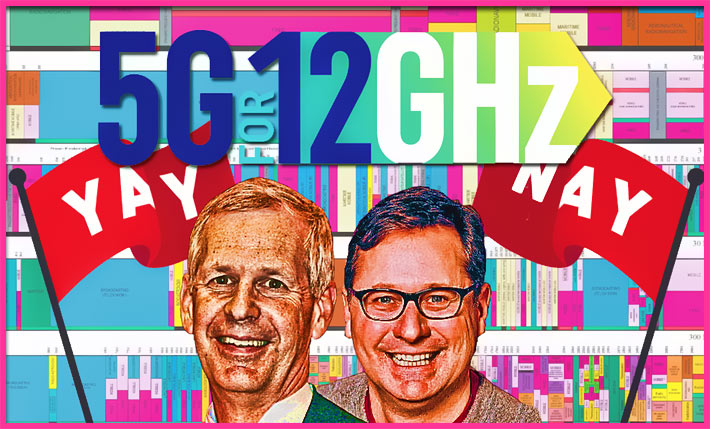 On Friday, the 5G For 12GHz Coalition, comprised of Dish Network, the Rural Wireless Association and other associations and telecommunications firms, noted the May 7, 2021 deadline for informing the FCC whether spectrum-sharing among 5G terrestrial services, direct broadband satellite (DBS), and non-geostationary orbiting satellites (NGSOs), both existing and prospective is possible.

The lobbying group’s co-chair, Joe Lockhart, a former Clinton-era White House press secretary, said it ”is not only possible, but is imperative.”

“Any operator who wants to offer services in the 12 GHz band and is insisting that it must only be used for one purpose, should have to explain to Americans why they are taking this anti-5G position,” Lockhart said.

At the eleventh hour in a filing, T-Mobile said the FCC should auction the spectrum to new licensees instead of granting terrestrial mobile rights to incumbents.

Dish, in its 87 pages of comments to the FCC, concluded that the agency should secure essential mid-band spectrum for 5G by allocating 12.2-12.7 GHz to flexible mobiles service.

In their comments, the two industry leaders underscore that the spectrum-sharing landscape and available interference-mitigating technology has evolved dramatically since the rules were first enacted, making it possible and prudent to expand flexible use of the band while protecting existing satellite services.

“The Commission has before it a great opportunity to maximize our spectrum capacity and meet the full potential of the 12 GHz spectrum band. It can do so immediately, by bringing its regulations in line with today’s realities,” said Chip Pickering, CEO of INCOMPAS. “American consumers and businesses deserve the win-win benefits that we can achieve by harnessing the power of this band to elevate our global leadership in the race to 5G against China, to bring innovative solutions online, and to enhance consumer choice and connectivity.”