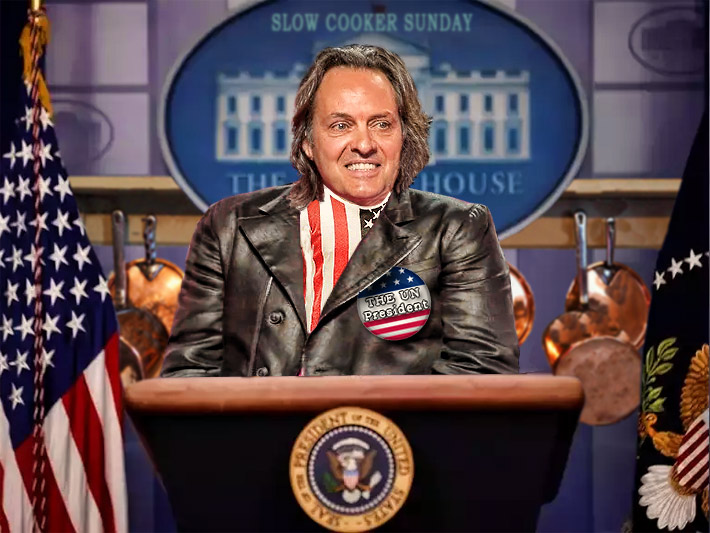 A CHICKEN IN EVERY CROCK POT? Former T-Mobile CEO John Legere abandoned his magenta clothing last April, but announced last week that his newest couture might be red, white and blue

The day after the 2016 presidential election that put Donald Trump in office, T-Mobile CEO John Legere Tweeted: “Congrats to the new POTUS. Let’s see what an out of the box, non-typical, non-politician can do for America.”

Last Thursday, reacting to the mob that attacked the Capitol, he wasn’t happy with what he saw and requested: “POTUS, please step down or go quietly. Don’t cause more Americans to attack America.”

He then took his anger a step further, stating, “For the first time in my life I am actually considering the possibility of running for office. It’s clear somebody needs to help real Americans find change.”

Legere could wait until the 2024 presidential election or go after Florida Republican Senator Marco Rubio’s seat ending in 2023 since Legere has changed his residency from New York to Naples, Florida after he bought a sprawling waterfront property mansion in late 2019 for $16.7 million, selling his Manhattan penthouse to Giorgio Armani.

Although Rubio’s base salary of $174,000 might not be enticing for Legere who was the nation’s highest-paid CEO in 2018 with a compensation package worth $66.5 million, his net worth is north of $300 million, allowing him to squeeze by with the reduction in pay.

Legere is a registered voter in Florida with no party affiliation. If he were to challenge President Biden in 2024, he might run as a Republican.

A 2015 Twitter battle between Legere and then-candidate Trump had both men arguing about UFC fighter Ronda Rousey.  Legere at that time questioned whether Trump was Presidential material after Trump said T-Mobile service was terrible.

“I am an undecided Republican… Well not totally undecided, I know what I don’t want :),” Legere wrote in a since-deleted tweet.

Legere said that Trump would likely lose his quest to be President.

In March of 2019, when T-Mobile was pressing the Trump administration to approve the T-Mobile/Sprint merger, Democrats during a House subcommittee hearing questioned Legere whether T-Mobile executives were staying at the Trump hotel in Washington DC to curry favor with the President.

Legere contended that it was not out of character for him or others at the company to stay at the Trump hotel, saying that he has long been a Trump hotel customer. “If I may add, I made the decision,” Legere said. “I’m a longtime Trump hotel stayer, way before this transaction.”

Legere and Trump’s commonality is they have mastered the art of social media, although Trump has now been banned from Twitter, Facebook, Instagram, Snapchat and many other platforms.

In addition, Stripe will no longer process payments for President Trump’s fundraising.

This should be of grave concern to Legere since he admittedly spends practically every spare moment on social media.

What he should stress over is if stoic Twitter CEO Jack Dorsey, who is enamored with vegan and Paleo eating fads and unusual eating habit binges, believes he became lactose and legislative intolerant after using one of Legere’s Slow Cooker Sunday recipes, and gingerly ate his al dente emoji while placing his order to ban him.