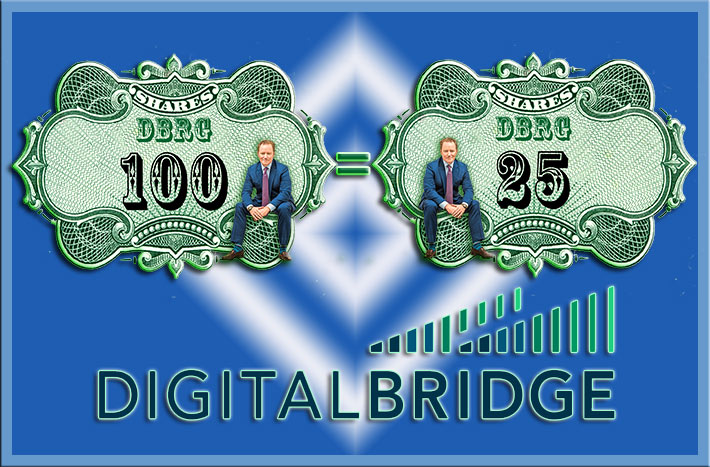 DigitalBridge Group announced a 1 for 4 reverse stock split where investors will see their total shares reduced by three quarters this quarter. However, the investment total will remain the same. Reverse splits aren’t always positive news, but CEO Marc Ganzi said the company’s long-term strategy and business model has never been stronger. He’s banking on the stock rising to get an additional $100 million payday.

A reverse stock split oftentimes signals that a company is trying to stay listed on major exchanges, such as the New York Stock Exchange, where a company’s shares are required to not trade below $1 for 30 consecutive days.

NYSE-traded DigitalBridge Group announced yesterday that within the next three months the company expects to have a reverse stock split in which one Class A common share will be issued in exchange for every four existing Class A common shares held by investors.

However, according to their press statement, DigitalBridge said, “The reverse stock split is intended to reinforce the completion of the company’s successful business transformation, more closely align DigitalBridge’s outstanding share count with companies of similar size and scope, and generate additional administrative cost savings, consistent with management’s ongoing initiatives to simplify and rationalize the company.

It is not known what companies DigitalBridge is comparing itself to as being similar. The company currently has approximately 655 million shares outstanding, whereas American Tower Corp.’s outstanding shares are 466 million; Crown Castle Int. Corp, 430 million; and SBA Communications, 108 million.

Digital Bridge also announced that its Board of Directors has approved a $200 million share repurchase program, effective immediately, which includes the authorization to repurchase both the company’s outstanding common and preferred shares.

Marc Ganzi, CEO of DigitalBridge, said, “This share repurchase authorization demonstrates our confidence in the continued demand we are seeing across our digital infrastructure portfolio and the momentum we are experiencing as the partner of choice to institutional investors in our sector.”

The one-for-four reverse stock split will provide 25 shares for every 100 shares owned by investors. The split is based upon the stock’s price when the transaction is official. The company plans to announce the reverse stock split effective date at least 10 days prior in accordance with NYSE notification requirements.

If DigitalBridge’s reverse stock split coincides with significant changes that improve operations, projected earnings, and other information important to investors, the higher stock price could stick and rise further. Often, investors have a perception that a lower price stock may reflect a struggling company.

Ganzi’s employment contract with the company states that if he can bring DBRG to $10-plus and make sure it stays there for three months – there’s an over $100 million bonus waiting for him.

It’s likely that that agreement will be revised to $40 a share. However, Ganzi, known for his abilities, management and acquisition skills, might easily reach that milestone.

“While macro-economic headwinds are impacting a number of sectors, digital infrastructure has proven to be resilient and our conviction in our long-term strategy and business model has never been stronger,” Ganzi said.