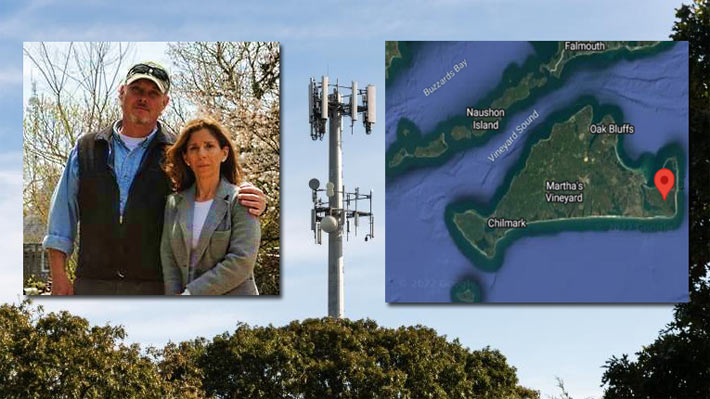 Dana and Robert Strayton appealed a Massachusetts Superior Court ruling that dismissed their lawsuit brought against the Martha’s Vineyard Commission and others over the approval of an AT&T cell tower that was constructed. The appeals court agreed with the trial judge’s decision.

Fears about radio frequency emissions affecting a Martha’s Vineyard man’s medical equipment and property value weren’t enough to allow a husband and wife standing to sue over the previous construction of an AT&T cell tower on the island, a Commonwealth of Massachusetts appeals court ruled yesterday.

Appellants Dana and Robert Strayton, who live on the island in Edgartown, filed a complaint against AT&T, Martha’s Vineyard Commission (MVC), and the tower’s property owner Robert Tynbo.

To assist with coverage on the island, AT&T constructed a 104-foot temporary tower on Fynbo’s property at 14 Sampson Avenue in 2016. The carrier analyzed more permanent solutions the next year and identified the need to build a 115-foot tower on the same small parcel, which was approved by the commission in 2017. A special permit was issued by the Edgartown planning board in 2018 and the monopole was erected.

The Straytons, who live approximately 200 feet from Fynbo’s property, filed the lawsuit in 2018 in Superior Court to repeal the MVP and planning board decisions and a jury-waived trial was held in late October and December of 2020 before Judge Paul Wilson.

Following considerable testimony and on-site visits, Judge Wilson dismissed the case, finding that the Straytons failed to provide documented evidence opposed to “speculative personal opinion,” such as Dana Strayton stating that she can no longer walk down Sampson Avenue, “because she does not want to be looking up to see if something is going to fall off the tower and injure her.” His ruling is available here.

In their appeal,  the Straytons raise two claims of error in Judge Wilson’s conclusion that they failed to establish standing. They claimed the judge erred in excluding evidence of adverse impacts from radiofrequency emissions from the proposed cell tower on certain medical equipment used by Robert Strayton.

They also contend that the judge incorrectly found that potential adverse effects on views from the plaintiffs’ property were inadequate to support their lawsuit.

The appeals court said Judge Wilson was correct in recognizing Section 704 of the Federal Telecommunications Act of 1996, that prohibits local authorities from regulating cell tower siting based directly or indirectly on environmental impacts of radiofrequency emissions that comply with applicable Federal regulations.

As for the Straytons’ contention that adverse effects on their views conferred standing,  the appeals court agreed with Judge Wilson who “found as a matter of fact that any effects from the proposed tower were not ‘substantial enough to constitute actual aggrievement.’ ”

The  Judges concluded that the Straytons didn’t have standing to challenge the MVC decision.