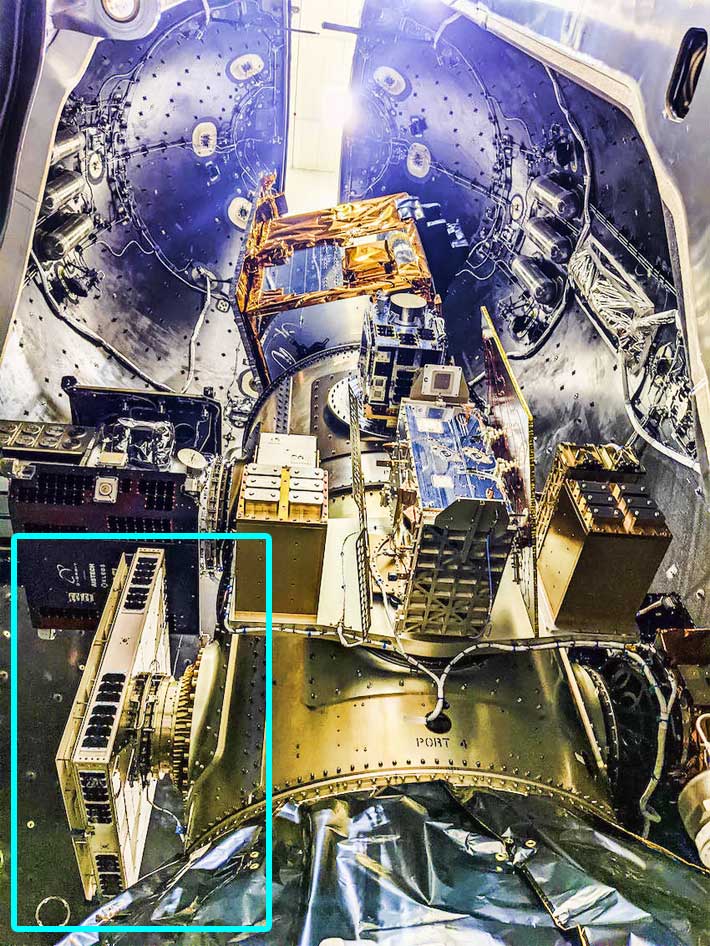 ABOARD THE EARTH ORBIT CO-LO KING – Lynk Tower 1 (outlined) hitched a ride on Friday from Cape Canaveral with 39 other payloads on a SpaceX Falcon 9 rocket. Although it is not known how much the company had to pay for the transport, on its web site SpaceX says it charges customers as little as $1.1 million to launch a payload of 440 pounds on a dedicated rideshare flight to sun-synchronous orbit.

Lynk Tower 1 is the first satellite covered by Lynk’s application to the Federal Communications Commission for a global commercial license to operate a satellite direct-to-standard-phone service.

“With the launch of Lynk Tower 1, Lynk is positioned to begin commercial service later this year and provides the world’s first true satellite-direct-to-phone service to citizens across the globe,” said Charles Miller, CEO and co-founder of Lynk. “For our flagship carrier partners, today’s news means that we are only months away from helping them solve the world’s ‘0G Problem’ and enabling their subscribers to connect everywhere.”

The technology in Lynk Tower 1 is an upgrade of Lynk’s fifth satellite, which connected to thousands of unique devices in the Fall of 2021, including smartphones, feature phones, and myriad cellular IoT devices such as cars, trucks, iPads, and John Deere tractors. Lynk Tower 1 was designed and constructed at Lynk’s Falls Church, Virginia facilities. It incorporates significant improvements in power systems, reaction wheels, star trackers, Ka-band radios, and upgrades to Lynk’s cell tower base station software stack. These improvements derive from Lynk’s previous five test flights and are the result of the company’s in-house ‘rapid-do-learn-loop’ satellite development process.

“Most companies take years to design and test new spacecraft concepts. Lynk’s spacecraft development process leverages a rapid-do-learn-loop strategy where we quickly iterate and fly new spacecraft technologies several times a year. We learned a ton from our fifth satellite in late 2021. Those lessons have already been implemented in our sixth satellite,” stated Tyghe Speidel, CTO and co-founder of Lynk. “Many told us this was impossible. It’s not. This technology is now very real, with three more satellites launching in the next six months as we roll out initial commercial services.”

The launch of the world’s first commercial cell-tower-in-space enables Lynk to begin solving the world’s “0G Problem.” Lynk Towers 2, 3, and 4 are already under construction and will also be launched in 2022. Lynk Towers 1-4 will allow millions of mobile phone owners to connect to a satellite using a commercial service provided by their mobile network operator (MNO). Lynk has signed nine contracts with MNOs to date and plans to begin global commercial service in 2022 with a dozen flagship operators.