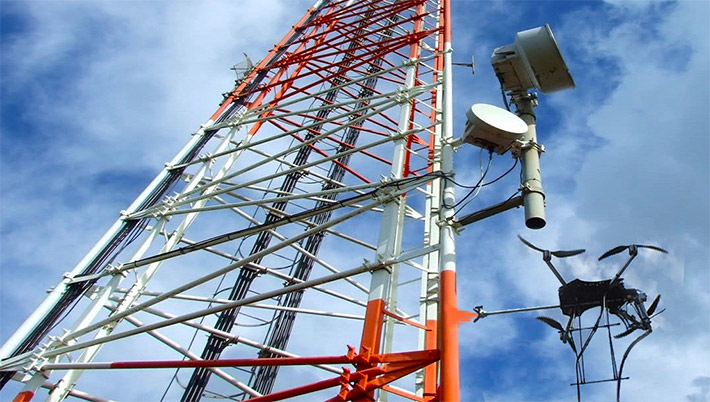 Lucid’s C1 drone (pictured below) can clean structures up to 120 feet in height. Will the next advanced drone be able to paint towers such as this one? “Not in my lifetime,” said one painting contractor.

Drones are excellent for mapping towers and providing inspections, but they haven’t had a serious impact on tower technicians’ work on structures.

However, window washing companies and pressure cleaning businesses might see a drop in income since Lucid Drone Technologies has teamed up with T-Mobile to have the carrier provide the IoT connectivity for their fleet of industrial spraying drones. 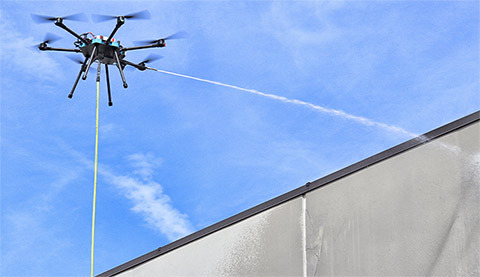 Lucid has teamed with T-Mobile to offer tethered cleaning services

In a sales pitch in the guise of a new technology press release today, T-Mobile said they were collaborating to “put maintenance teams and exterior cleaning companies out of harm’s way,” but their selfless safety slogan could be interpreted to say, “out of business,” because unlike tower contractors who lost profitable mapping opportunities, they were able to transition their talented technicians to other climbing, maintenance and installation projects.

Lucid’s web site states that their C1 Drone can complete jobs five-times faster from the ground than traditional cleaning requiring elevated workers. T-Mobile also stated that companies can also leverage their network to fly drones beyond line-of-sight, possibly allowing a project to be competed with one on-site worker.

Whereas to pressure wash an average residential roof in Florida might take two people three or more hours to complete at a cost of approximately $275, it is unknown how long it would take a Lucid drone system to complete the job with one man on the ground.

In high mold and mildew states, a cottage industry of residential pressure washing companies have popped up since the average for a 4400 PSI pressure washer, hoses and other equipment is $5,000 or less, plus a trailer, vehicle, and ladders.

However, a Lucid soft wash rig is $14,599, in addition to the cost of the C1 drone system plus a trailer and vehicle.

Will tower painting drone systems be next?

Although the the T-Mobile release inferred that Lucid was the first drone manufacturer to use a wash system for building exteriors, companies like Apellix have similar systems as well as drones that can spray paint.

Two tower painting contractors contacted by Wireless Estimator scoffed at the idea that a drone would be capable of painting a tower faster or more economically than a professional painter using rope access work.

“I don’t think that artificial intelligence could ever replace a competent tower painter, at least not in my lifetime,” said one company owner who is convinced that there would be no way for the drone to paint the interior sections of the tower.

“You’d have to have a drone with an extendable pole that could get into all the crevices, corners and bolts, and that isn’t going to happen and couldn’t be done. And I guess you would have to have a separate drone with a wire brush prepping sections,” he said.

In addition, most painted towers are 200 feet and higher, and Lucid’s capability is maxed-out at 120 feet.