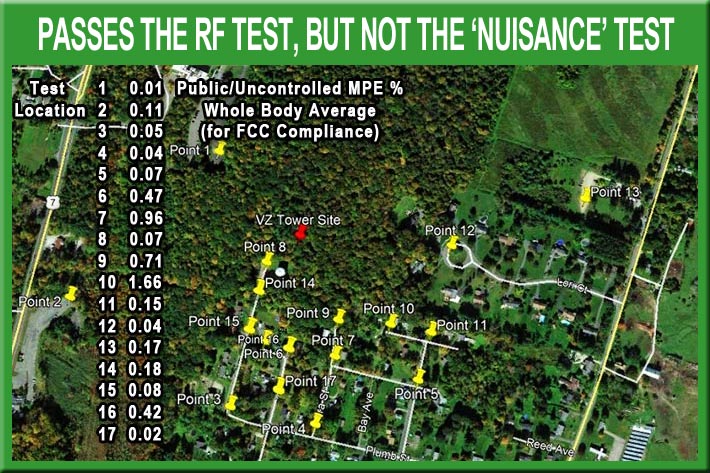 Although a study showed that RF measurements of the Verizon cell site passed with flying colors, the Pittsfield, Massachusetts Board of Health wants it taken down because residents claim that it is causing health issues and it renders “certain dwellings unfit for human habitation,” and is a “nuisance”.

Tomorrow, Pittsfield, Massachusetts Board of Health (BoH) officials will ask the City Council to back up their cease-and-desist order against Verizon Wireless to discontinue their use of a cell tower at 877 South Street, requesting $84,000 in legal fees for two outside attorneys, although some members believe their attempt will be futile.

The BoH issued an emergency order on April 11, 2022, giving Verizon until last Friday to request a hearing on the order, or the BoH would shut down the 115-foot monopole site that was activated in August 2020. The BoH said its emergency order will abate a ‘nuisance’.

The order enters unchartered legal waters since it is based largely upon residents’ complaints of rolling headaches, nausea, dizziness, tinnitus, insomnia, palpitations, and other health problems, and not because it exceeds FCC compliance standards.

In fact, last July, the BoH held a hearing, and City officials said that an RF emissions study identified that the tower is safe.

However, Gina Armstrong, the City’s health director, suggested that despite the low RF readings, the issue of the tower’s possible impact on health in the neighborhood cannot be dismissed.

To circumvent FCC Telecommunications Act guidelines that prevent RF concerns to be used to deny tower siting, the BoH is claiming that pulsed RF can “directly cause harm to at least certain individuals,” and it “may effectively render certain dwellings unfit for human habitation or constitute a condition which may endanger or materially impair the health or safety and well-being of an occupant as defined in the State Sanitary Code 410.020.”

According to attorneys from two law firms that are proposing to represent the City, due to “the great public importance of this matter,” they have reduced their $650 and $750 an hour normal billing rate to $400.

Their proposal anticipates that through their representation, if they can’t get Verizon in negotiations to resolve the matter – at a cost of $24,000 – they will represent the BoH in litigation for $60,000, allowing for 150 hours.

However, they note that if Verizon were to bring suit in Federal court, or in the Massachusetts trial court, the budget would likely increase.

The EHT said that it had also provided 11,000 pages of documents in that lawsuit.

Last February when the BoH approved the order that was delivered this month, in an NPR broadcast, BoH Chair Bobbi Orsi said, “There is a very good chance that we will not win this. You know, and in some ways, we know that Verizon is following the FCC guidelines in some way, which right now we know are not protective of enough of public health.”

“I don’t think, based on our conversations, that that’s going to magically change Verizon’s position, and I think it will end up in court, and I think then, they’ll – I mean, I don’t see how they don’t prevail in court,” he said. “And in some ways, that strengthens them. So, but, you know, if people feel like there needs at least to be some action, that’s a way to show some action. But again, I feel like I want it on the record that I think it’s going to be extraordinarily unlikely that that will change anything.”