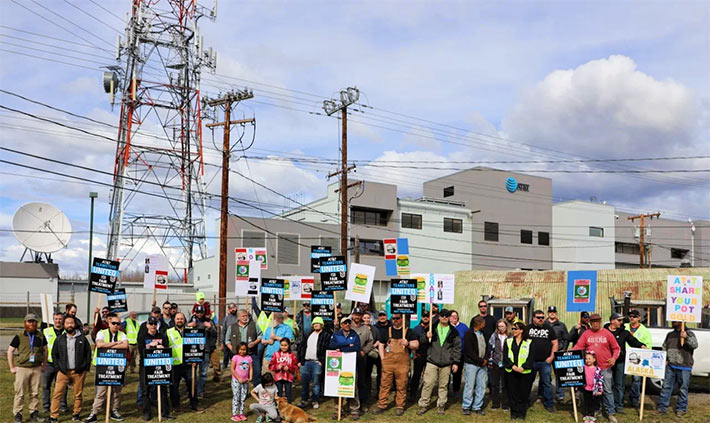 UPDATE – August 4, 2022 – Following the publication of this article, a union spokesperson said that of the 175 workers at AT&T’s Alascom facilities, approximately 105 of Teamsters Local 959 Alascom members “are tower climbers”. According to the union’s hiring requirements, any Technician/Installer “must have or obtain tower climbing certification” and have at least “5 years Electronic Technician background.”

It is not known whether there is an apprenticeship program for “tower climbers” or if, other than tower climbing certification, additional training and certification is mandated, and if they are aligned to the stringent National Wireless Safety Alliance’s (NWSA) certification requirements for Telecommunications Tower Technician 1 and 2.

To ensure a continuity of quality installations and safety, AT&T and other carriers require a percentage of  NWSA-certified technicians to be on-site in order for a crew to perform construction or maintenance services. It’s likely that AT&T did not insist that the requirement be included in their new contract agreement.

Tower climbers have a rich heritage of building America’s networks, but experienced professionals will argue that tower climbing is just a mode for the country’s highly skilled tower technicians to get safely to their work station. Then years of experience, training, and positive influences kick in to secure and maintain the nation’s telecommunications networks.

August 3, 2022 – Recent activists will inform you that there is only one Tower Climbers Union (TCU). It was founded earlier this year by the Communications Workers of America (CWA), and it has approximately 14 members who organized under the TCU umbrella at QualTek, a wireless contractor with a satellite office in Nevada. It claims to have a coalition of close to four hundred supporters. 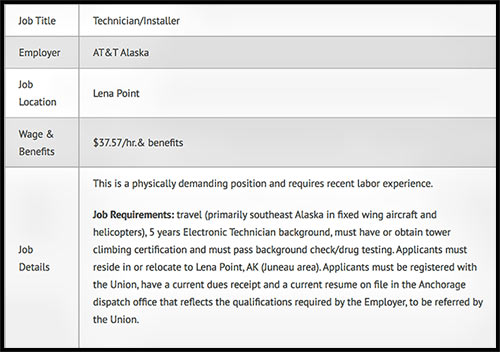 The union’s technician/installer openings were sparse during the past year. Only two required the ability to climb a tower.

As one media outlet headline said, AT&T had reached an agreement with an “Alaska Tower Climbers Union”.

Two TV station reports also highlighted the benefits that would end up in tower climbers’ pockets, simply because that was the lead in Local 959’s press release.

AT&T owns and operates the Alascom telecommunications infrastructure in Alaska, and it is unknown how many tower climbers are employed. However, in a separate press release regarding the agreement, AT&T said the agreement ratification on July 31, 2022 covered “about 170 employees who primarily work in technician and mechanic jobs in Alaska.”

Because Alascom owns and operates fiber optic cable throughout the Alaska Panhandled and provides services for the Alyeska Pipeline, and numerous other national security and defense systems, non-climbing technician roles are numerous.

However, the number of ‘tower climber’ positions within the company is unknown and may be less than a dozen.

Although a union representative said they would research and provide Wireless Estimator with the number of climbers that are employed at Alascom that they represent, they did not provide a response after multiple requests.

A review of Local 959’s job board only identified vacancies for two Technician/Installer positions for the past 12 months. The job requirements stated, in part, “…must have or obtain tower climbing certification.” And other than the applicant requiring an electronics technician background for five years, the job details were minimal.

The union love/hate relationship is prevalent in almost all press releases. Local 959 said they were proud to stand up to AT&T’s “corporate greed”.

“Our Alascom members risk their lives in the worst Alaskan weather to repair equipment and keep phone and internet services running. They represent the finest of the Teamsters – taking on yet another corporate bully to protect their families and demand the respect they deserve,” said Sean M. O’Brien, Teamsters General President.

But the Teamsters said they reached a “fair” agreement.

AT&T said they were pleased to sign the collective bargaining agreement, turning it into a sales pitch to knock its carrier competitors.

“AT&T is the only major U.S. telecommunications company with a fully union-represented, non-management workforce where about 73,000 employees are unionized. While other companies are wasting resources combating unionization, AT&T is focusing on the core business with a strong union workforce, and consumers agree – more than 68% of Americans view labor unions favorably, the highest rate since 1965,” AT&T said following their accepting the agreement.