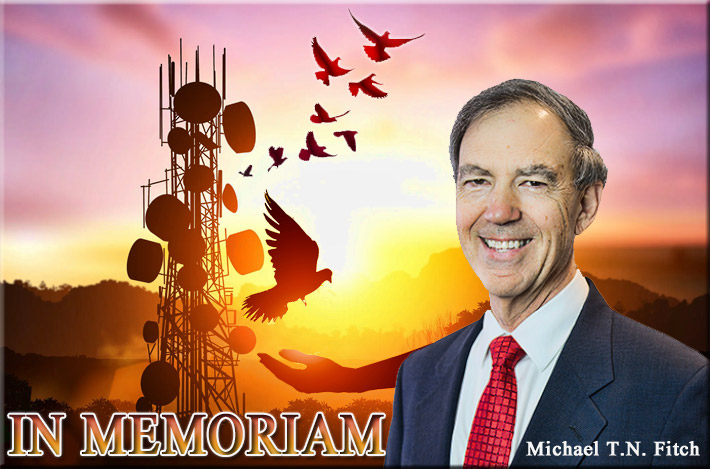 Through Michael Fitch’s leadership, he added stability to a fractured siting community, leaving a legacy of ensuring that America’s networks were able to be built out without fighting off every frivolous, unsupported lawsuit.

Michael T.N. Fitch passed away on July 22, 2022, leaving behind a rich legacy of assisting towercos and carriers in advancing infrastructure siting.

Fitch spent the first 20 years of his extensive career at the Federal Communications Commission (FCC), where he advanced from Staff Attorney to Division Chief, Bureau Chief, and ultimately Senior Legal and International Advisor to the Chairman.

He moved to the U.S. Department of State, where he was an Office Director and Deputy Assistant Secretary of State in the Communications and Information Policy Bureau during the Clinton Administration. While there, he led U.S. delegations to Inmarsat, Intelsat, and International Telecommunication Union meetings.

Following his government service, Fitch became the Vice President of Regulatory Affairs and Spectrum Management at Hughes Communications, now DirecTV. While at Hughes, he was a member of the Board of Directors and the Chairman of the Board of the Satellite Industry Association.

At PCIA, he led a successful legislative effort that resulted in the passage of Section 6409(a) of the Middle Class Tax Relief and Job Creation Act of 2012, which mandates collocation by right at many wireless towers and sites in the U.S.

In 2015, he joined Keller and Heckman’s Telecommunications Practice, providing the unique perspective of working with both government and industry.

“We’re deeply saddened by the news of the passing of Michael Fitch, and we extend our sympathy to his family and loved ones,” said WIA Interim President and CEO Tim House. “Mike was a titan in our industry and led WIA from 2005-2012, back when the organization was known as PCIA. During his tenure, he guided the association through rapid changes in our industry and successfully advocated for policies that spurred network advancements and innovation. Mike led an impressive life, with a prolific career in both public service and business. Mike hired me at then-PCIA 15 years ago, and I will personally miss his counsel, friendship, and our many conversations about music. As an industry, we’re thankful for his life and work, and he will be greatly missed.”

“NATE is saddened by the news of Michael Fitch’s passing and extends our thoughts and prayers to his family and friends,” said NATE President and CEO Todd Schlekeway.

“When I first started at NATE in 2012, Michael was leading the PCIA organization and I appreciated him taking time to visit with me as a newcomer to the industry. The Association also appreciated Michael representing the California Wireless Association as a speaker at our NATE UNITE 2014 Conference in San Diego, California. Michael’s in-depth industry knowledge and gentle demeanor will be missed by all who knew him”.

Services information will be provided when available.